Another Take By Zac: Film Review: The Other Guys (Will Ferrell and Mark Wahlberg) 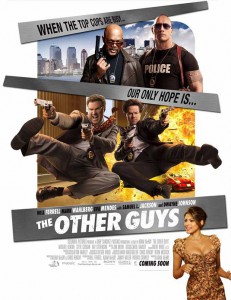 The Other Guys is the latest from Adam McKay and Will Ferrell and it serves as a great send up of the buddy cop genre with a consistently funny pacing and many flashes of brilliance along the way.

Allen Gamble and Terry Hoitz are not the guys, that title is held by Detectives Highsmith and Danson.  Gamble and Hoitz are the other guys on the force who push the pencil and do the paper work for the NYPD heroes.  Besides being the other guys of the office, Gamble and Hoitz are quite the odd couple of partners as well.  Gamble has long been behind a desk, in police accounting, and has worked his way up to detective but has no ambition to leave the office during the day.  Hoitz is the exact opposite.  Itching at any chance to get out on the streets and to be the guy, he unfortunately is in some hot water after an unfortunate incident in the Yankee club house.  But when Gamble uncovers a scaffolding permit violation the two begin to get wrapped up in a crime bigger than they could possibly imagine.

Now, The Other Guys is silly.  If you are aware of McKay’s previous films than you know that nothing is really meant to be taken all that seriously in his films and that is no different here (well, almost).  McKay and his cast and crew perfectly get what they are going for here and the tone is just about perfect through out.  Yes there will be silly moments of highly coordinated tuna revolt, silent fighting, pimp flashbacks, and much, much, more but it all seems to fit right into this world.  I think a lot of this can be paid to the excellent set up for the film as we watch the guys, Highsmith and Danson, run amok around New York City only to be rewarded for their reckless actions.  Sam Jackson and Dwayne Johnson set the tone perfectly for the rest of the film as Highsmith and Danson, respectively, and there is no looking back from there.

While the film might seem like just a bunch of silly gags and jokes on the surface, most of which are very funny by the way, McKay really taps into the cop genre roots and subverts it brilliantly along the way.  Whether it is our hero’s running around in an eco friendly Prius rather than some ridiculous muscle car, taking a brilliant jab at the absurdity of the over top action and confidence of most action film heroes, or poking fun at the tragic back stories of our hero’s tortured past there is a lot of great stuff working here.  But the most brilliant stroke of genius by McKay and company is to make white collar corporate crime the bad guy here.  McKay provides some excellent social commentary on today’s disgusting financial crime scene and on more than one occasion seems to be screaming at us to open our fucking eyes and realize the horrible things going on around us.  The end credit sequence is especially informative and a bold move for a comedy to stop and spell out the depressing financial scene our country is letting happen.  My favorite subversive jab in the film might be McKay’s dig at the stupidity of people rolling over to anything some idiot says because they show a little patriotism; which is a disgusting angle of politics I can’t stand and can’t believe people buy into.

I mentioned the actors in the film earlier and how they all are perfectly in on the tone of the film and there are countless kudos to be passed around.  Jackson and Johnson are just fantastic at lampooning and perfectly playing off their action movie personas and I would love to watch a prequel movie with these two.  When it comes to the main cast, Will Ferrell and Mark Wahlberg each bring something different and special to their roles as Gamble and Hoitz.  Ferrell still kind of sticks to his shtick but he is as funny as ever and still brings a lot of unique traits to Gamble.  His brushing off of hot women and anything associated with “Gator” are sure to appease fans; and the tuna speech, priceless.  Wahlberg’s performance might seem a bit one note at first but there is so much subtle brilliance going on underneath that it is kind of amazing.  Hoitz is always jumping to these ridiculous conclusions, plays the tough guy yet easily can be talked down by a loser like Gamble, and can still be a badass when necessary.  Wahlberg blends all of these elements together brilliantly and I can’t wait to catch more of his subtle work the second time around.  Finally, Michael Keaton plays the precinct captain and it is great to see him shine again.  Why did Keaton ever fall out of fashion in the movie world?  He keeps right on pace with Ferrell and Wahlberg and his character also has one of the best recurring gags in the film.

In the end, The Other Guys is silly, sharp witted and, most importantly, very funny.  Ferrell and Wahlberg shine in the leads and an excellent supporting cast helps keep this film firing on all cylinders.  There was one lull in the film near the end, but beyond that the movie rarely drops a joke and moves along very nicely.  Hell, the action scenes even look solid as McKay directs his way to possibly his second best film.  Like most McKay films this one will only get better with time but as it stands now it is already a pretty great comedy effort.

The Other Guys is a B+