Another Take By Zac: Film Review: The Fighter 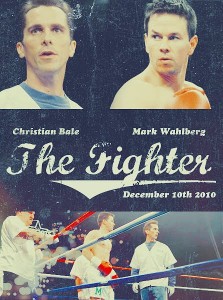 The Fighter is a fine character study mixed in with a nice little true life sports movie that I can’t help but feel didn’t reach its potential or bar set by its peers.

Following the last attempt of Mickey Ward to win a boxing title we dive into the people around him and shape him into the boxer he has become.  Unfortunately the boxer he has become is on a losing streak and Mickey seems destined to be another one of the many has-beens of the boxing world.  His brother Dicky is one of those has-beens but is thinking about making a comeback for which he is being followed around by an HBO camera crew.  Dicky is the pride of Lowell, Mass., where the brothers are from and still reside, and Mickey has always played second fiddle to both Dickey and their Mom who seems most concerned about the elder sibling’s career.  After getting his ass kicked by a last minute replacement in his apparent stepping stone match, Mickey and his new girlfriend Charlene begin to outline a new plan for him as his family life spins out of control.

First and foremost, The Fighter is a pretty good to great little movie.  It is gritty and realistic, full of a ton of great performances, and features some decent boxing action in the film’s excellent third act.  I really could go on and on about how great the cast is from top to bottom but I will save that for later and transition to my quibbles first.

David O. Russell’s last two films (Three Kings, I Heart Huckabees) are a couple of my favorites and I am not going to lie in that I was disappointed with how restrained this picture feels creatively.  Now I understand the choice to keep the film feeling authentic and real feeling but show me something interesting at least here or there; we all know you are more than capable of it.  The film’s first two acts are a bit belabored and could have been a bit tighter as well but luckily the third act makes up for any wavering in the earlier parts.  I also just felt like the Lowell world building fell a bit short compared to similar material in Ben Affleck’s two films (Gone Baby Gone, The Town) and the boxing scenes just looked very unspectacular.  The boxing early in the film was not very convincing nor thrilling, and on top of this all of the footage is down graded to look like it is an HBO/ESPN TV broadcast.  Again, I get the authenticity they were going for here but boxing can be captured so beautifully and cinematically and The Fighter never comes close to reaching those heights of some of its peers.  I greatly missed those beautiful movie moments in the ring and while they very successfully captured the TV look I wanted my fights to look they were in a movie.

Any of these minor complaints are easily saved by the countless great performances in the film starting first and foremost with Christian Bale as Dicky.  It’s funny that this “supporting” role is the meatier role of the two boxers in the film and Bale like Dicky is going to get all the attention.  Bale’s attention is well deserved as he delivers one of his best performances in his great career that will rivet anyone who watches the film.  The character is so beautifully layered and complex and Bale gives each part of Dicky an unmatched energy in the field that is a sight to be seen.  Where Bale gets to be all crazy and showy, Mark Wahlberg shines playing the quiet, intense type in Mickey.  Wahlberg gives the film its rock and carries its heart as he desperately drives forward trying not to hurt anyone along the way.  Melissa Leo is also nasty and easy to hate as the overbearing mother/manager that is nowhere near as good at her job as she thinks she is.  In fact, Mickey’s family as a whole is terribly tragic and sad as you see the way they lived their lives; the sisters especially in the way that they are depicted here.  Last of the big stars is Amy Adams as Charlene and she is appropriately full of fire and can stand up to anyone in the cast.  Her character is a tad rushed and underdeveloped but Adams does a great job at still making the character unique and fun, delivering some of the better lines in the film.  Jack McGee is great as the husband and father figure to all of kids in Mickey’s family and he too brings a lot of heart and levity to the picture.

In the end, The Fighter is a fine character piece featuring some great performances but only one role that allows for some really nuanced levels.  The boxing side of things lacks any real originality or flair as well and one can’t help but think that this movie could have been even better than it already was.  Still, you can’t go wrong if you check out the fighter as it is an actors’ showcase and will easily entertain you over it run time.

The Fighter is a B+