Another Take By Zac: Film Review: How Do You Know 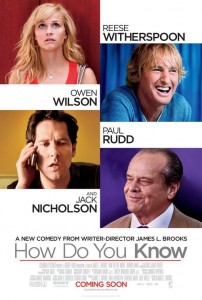 How Do You Know provides a couple sporadic laughs but is more or less an abysmal failure of a movie at every turn.

The story revolves around Lisa, an aging Olympic softball star, who gets cut from Team USA and finds herself trying to figure her life out.  Her life happens to run into a pair of guys at very different stations in life.  Matty is a star pitcher for the Washington Nationals who likes to womanize but is transfixed by Lisa for some reason, while George is a mid-level corporate banker daddy’s boy that is being sued by the U.S. government.  A love triangle ensues and you can probably already guess what happens.

Now positives first, and there really is only one, in that Paul Rudd and Owen Wilson are able to squeeze out a laugh or two here and there simply because they are both talented comedians.  Other than that there isn’t a whole lot to like or laugh at.  I mean, the movie fucking neuters Jack Nicholson into being anything but mildly amusing throughout most of the proceedings.  The script is just a god awful mess; add in some horrendous editing with no sense of flow or pacing and you got a tough road to tread.  I mean the film will go 15-20 minutes at a time where we don’t even see Rudd or Wilson’s characters.

Reese Witherspoon plays Lisa and her hard nosed and emotionless portrayal doesn’t give you a whole lot to latch on to and enjoy as a character.  None of the characters are all that likable or realistic actually.  Rudd’s character is so discombobulated and odd that I can’t imagine him ever reaching his position.  Wilson’s ballplayer is the most believable of the bunch and while he made me laugh the most he isn’t terribly likeable.

The film also needlessly throws in a pair of grating and completely ineffective characters in Lisa’s softball buddy and George’s assistant.  Every single one of their scenes could easily have been cut and serve no reason beyond moving the plot forward or explaining emotions.  Actually, George’s assistant might be worth it for the most real and affecting scene of the movie delivered by a character we haven’t seen till he shows up and never seen again after said moment.

It is the film’s third act that really hurts things here as the wheels just come flying off.  Characters start making ridiculous conclusion and decisions in their life simply to move the film to a finale that has zero believability.  And the sacrifice one of these characters is willing to take at the end is so dumb founding and played so “awe shucks” it just left me far more confused than anything.  Lisa is constantly deluding herself along the way about her romantic life as well and her character is just a poor female figure for people to be appreciating.

In the end, How Do You Know is a complete mess and an utter waste of time.  Don’t let the big names and monster marketing campaign trick you into see this mess as it is a waste of money.  There are countless awful romantic comedies that excel past this one, yes even the awful ones, so please go spend your money somewhere else this weekend, anywhere else but here.

How Do You Know is an F