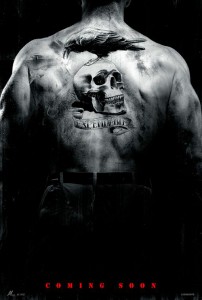 Sylvester Stallone’s The Expendables is a man on a mission, action all stars extravaganza being sold as an explosion a minute yarn.  But if it wasn’t for a solid final 25 minutes or so of non-stop action then this film would have been a colossal failure of its potential.

Now I hate to feel a little burned by a film’s marketing, as that happens a tad too much in Hollywood if you ask me, but look at the cast Stallone has assembled here!  I mean, just reading the cast’s names is a promise of big things. Stallone, Jason Statham, Mickey Rourke, Jet Li, Dolph Lundgren, Steve Austin, and the list goes ever on.  These guys should be beating the shit out of each other from frame one; right?  Well sadly that isn’t the case and after a brief “actiony” opening sequence the film is pretty dry on fighting and action for sometime.  Now I am all for character building, but after about 2/3 of the way through the movie we have been treated to one action beat that consisted of quick shoot out, a lame car chase, and a cool gimmick on a dock; that’s it.

This wasn’t the movie I signed up for.

Luckily the third act roles around and Stallone pulls out all the stops and the action is admittedly pretty great.  A nice mix of “haven’t seen that before” mixed with solid fisticuffs/gun play goes on for about 20 minutes straight and the film finally quenches our thirst for what we came for.  But was it to little, to late?  Sure everything that came before it wasn’t awful but when a film doesn’t really deliver on its promise for 2/3 of the picture how are you supposed to judge that?

There are some nice surprises though with Mickey Rourke being the standout of the picture.  Rourke doesn’t get in on the action at all, he is the Expendables’ handler, but he is very funny and incredibly poignant in a scene in which he describes why he hung it up; the moment might be the best bit of the film.  Statham, Li, and Lundgren all shine as well and take full advantage of their screen time; Statham getting the most as the films real lead.  Eric Roberts also rocks as the bad guy in the picture and his charisma and swagger ooze through the screen.  The rest of the cast is solid enough, but not given all that much to do quite honestly. There was one big “huh” question mark for me in the casting though.  Everyone in this film was smartly cast based on their action star persona and they play to it wonderfully, so why the hell did they get Bautista from Dexter to play the bad guy?  Now I think David Zayas is a nice actor, but he is kind of a softie in Dexter and I couldn’t take him seriously in the least bit as some face painting dictator type; oh well.

Fans of dumb action dialogue will have plenty to laugh at here but a part of me wished they really would have ran with the over the top dialogue.  There are a few genuine bits of comedy written in there as well and I found myself laughing out loud on more than one occasion.  But a couple flashes of quality are about all you get from the script as it is kind of a mess otherwise.  They spend so much time setting up Statham’s side story and they never come close to even trying to pay it off; well except the fight that comes out of it.  Also, Stallone’s motivations are oddly uninspired and it is a really tough sell that they all risk their lives over some girl with a big heart.  I also really had no idea what the bad guys were doing, why they were doing it, and this goes for just about everything involved with the plot.  And again, I wasn’t worried about the plot coming into this but we sadly have to endure through a lot of aimless narrative meandering.

In the end, The Expendables is quite the uneven affair that almost loses us before Stallone lives up to the motto of wowing them in the end.  When things start going boom in the film’s third act the things are a lot of fun but there isn’t much else to work with beyond that.  A bit more originality and action would have really helped this film live up to its perceived stature and a worthwhile third act doesn’t quite save the picture.  That said, I guess the first 2/3 are worth sitting through if you are at all interested in the picture to catch the big finale; just don’t say I didn’t warn you.