Another Take By Zac: Film Review: The Dilemma 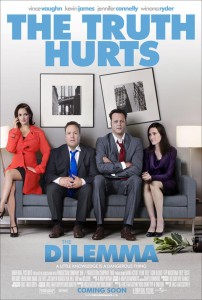 The Dilemma is a bit all over the place and doesn’t really know what it wants to be and unfortunately doesn’t embrace the dark side of the film that is kind of interesting.

The film follows a pair of friends/business partners that are have an unsuspecting wrench thrown in their relationship when one of them sees the other’s significant other with another man.  This proves difficult for the one who saw the adultery, Ronny, as he doesn’t know how to break the news to his buddy, Nick.  To compound the problem even further, Ronny, doesn’t know what to do with his own girlfriend as Nick and his cheating wife, Geneva, had been pressuring him to pop the question before all these adultery issues arose.  Ronny begins to sneak around after Geneva and when he finally confronts her a war of secrets begins to unfold.

Now Ron Howard directed this film and a lot of people can’t really figure out why he is doing this broad comedy based off of the TV spots that have been on air.  The film they are selling is a broad buddy comedy that will pile on the laughs, or at least try too, again and again.  This is definitely not what the film is though and you can see what might have drawn Howard to the film.  Sure there are attempts at some broader humor and conventional Vince Vaughn shtick but the heart of the film is a kind of a dark look at romance and adultery.

When the film gets away from the humor there are some pretty frank looks at the pitfalls and problems that can arise in marriage and Geneva and Nick’s relationship slowly shows its many flaws and wounds.  These parts of the film are actually quite solid and I really wish they would have gone this direction more than they did.  They skim the surface of these ideas and I think Howard could have made a very good film mining these ideas and playing up the gambling addiction plotline/history between Ronny and his girlfriend.  Vaughn could have kept the film darkly funny and the material would have been far more compelling if you ask me.  The film seems like it wants to dip its toes further into this territory but it never makes the plunge.  It is a shame because its mixed feelings and intent really hurt the film and will for sure confuse many movie going patrons this weekend.

The actors in the film all do a fine job with the four leads being filled out by plenty of friendly faces.  Vince Vaughn stars as Ronny and if you like Vaughn you will enjoy what he does here.  Sure he has done some better work but the character is classic Vaughn and you will for sure find some enjoyment if you’re a big fan of his.  Kevin James dials his shtick back quite a bit here and delivers his most honest and believable work in a while; based on what I have seen.  James can be good, Hitch anyone, and this very well might be his best work since.  Jennifer Connelly is given little to nothing to do in her part but does a believable enough job none the less.  Seems like quite the waste on such a talented actress though.  Winona Ryder is probably the second lead in this film and she takes full advantage of her largest role in ages.  Ryder really shines in one scene in particular when she and Vaughn go toe to toe in a diner.  Channing Tatum is quite solid and funny in his supporting role here and was easily one of the more enjoyable aspects of the film.  The biggest waste of talent and most pointless role in the film though is Queen Latifah as an executive over at GM that serves little purpose to the plot and is one big sex joke that doesn’t work.

In the end, The Dilemma is a missed opportunity for Howard to do something interesting through the studio system.  The elements for a mainstream and darkly comedic look at the issues and problems of relationships are here but the film never comes close to fully embracing them.  He gets a decent amount of work out his actors, and Vaughn is Vaughn, there just isn’t enough comedy and too much tonal confusion for the film to succeed.

The Dilemma is a C-