Another Take By Zac: Film Review: The American 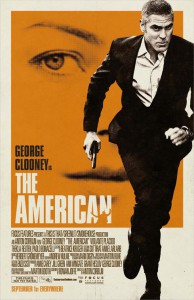 The second feature effort from Anton Corbijn is almost as good as his first and is a quiet, deliberate, and sexy thriller lead by the great George Clooney.

Clooney stars as Jack/Edward, a hit man that is loosing his drive for the profession though is still as sharp as ever.  After a too close for comfort encounter with some enemies he decides to get out but his boss sucks him in for one last job.  Clooney doesn’t have to pull the trigger but is instead responsible for building the ammo and gun for a young female assassin’s next hit.  While secluded in the countryside of Italy Clooney still can’t feel safe from the Sweds and is constantly looking over his back as he puts together the pieces needed for the assignment.  Beyond the security threat, he also is coming to terms with his past and tries not to make the same mistakes moving forward.

Now, this is not the movie they are selling.  I will repeat; this is not the film the commercials are selling.  It is quite a great little film but it is not the action filled thriller the trailers will lead you to believe.  There are three action set pieces in the film, but two of them can barely be called that.  Having said that, the film keeps you on the edge of your seat and the lingering shots and ambient noise will have you caught off guard at every stray backfire or off screen noise.  Beyond not being an action film the films pacing will kill unsuspecting viewers I imagine.  It is never dull but is full of long takes, deliberate pacing, and extended moments with no dialogue at all.  Clooney is in every shot for the most part and he makes this pacing and subdued nature of the film work.  His face and eyes say so much and he shows off why he is one of the best actors working today.

The film is also beautiful, we are talking about Anton Corbijn here, and the film might up Control visually as it is just striking to look at.  The film is also unique in that every shot lingers a second or two longer than expected and it makes you think you should be seeing and looking for something you missed.  Corbijn’s camera also works wonders in when dealing with vehicles and the opening credits are the best of the year quite possibly.  The film is full of beautiful camera work throughout and the sound design is quietly brilliant as well.  The film is a technical marvel and Corbijn is someone to watch in the film medium officially from here on out.

The other surprising thing about the film is just how sexy it is.  There is a sex scene in the film that was just, well it was something else and that is thanks solely to the work of a fairly unknown actress, Violante Placido.  She is just gorgeous and sexy in this film and she has a wonderful chemistry with Clooney throughout. She also has one of the most convincing orgasms to grace the silver screen.  Playing the other female in Jack/Edwards life is Thekla Reuten as the young female assassin he is assisting on his last job.  She also has some nice chemistry with Clooney as she changes looks every time she pops up on the screen.

In the end, The American is a technical achievement and marvel for Corbijn and features a wonderful turn by Clooney.  A sexy and quiet thriller that will keep you on the edge of your seat as the film slowly moves towards its conclusion.  Watching Clooney work is a fantastic experience as always and he does a whole lot with not a lot to do here and plays a pretty bad ass assassin to boot.  Go in with the right expectations for the film and you will not be disappointed and you will discover this little thriller to be very rewarding.

The American is an A-