Another Take By Zac: Film Review: Scott Pilgrim vs. The World 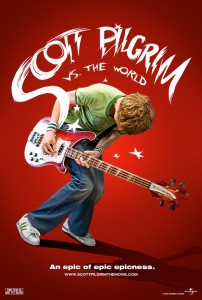 Edgar Wright’s Scott Pilgrim vs. The World is a kinetic, and often times perfect, adaptation of Bryan Lee O’Malley’s fantastic comic series and is a movie that is unlike almost anything you have ever seen.

Scott Pilgrim is a nice guy, but he can be kind of a dick, and rather oblivious, but ultimately he is dating a high schooler.  Knives Chau, she’s Chinese.  The two pow around Toronto, nearly holding hands, and maybe even hugging once; it is easy, safe, and comfortable for Mr. Pilgrim.  That is until Ramona Flowers enters Scott’s dreams; literally.  And before he even knows it Scott meets Ramona in real life and he can’t help himself but be drawn to her while he quickly begins half-assing his relationship with Knives.  Scott enters a sticky love triangle with the two that is only further complicated by the appearance of the League of Ramona’s Evil Ex’s whom he must defeat in order to win her heart.

The film is over the top, hilarious, looks beautiful, and filled with so many geek references it is a required second viewing.  The film is the first successful attempt to capture the spirit of a video game to a T for the entirety of its entire run time and it even goes further.  Wright has made this film one of the coolest and superbly executed comic book adaptations of all-time.  The film feels like a comic book in motion more than any comic book film, except for maybe Sin City, and Wright seamlessly blends O’Malley’s comic conventions into the film.  From the title cards, the chapter names, character fun facts, or the visualization of certain sound effects, Wright keeps your eyes darting all over the screen.  I also love that Wright found unique and fun ways to instill some of O’Malley’s panels into the picture both literally and by perfectly capturing some of the books panels on film.

The film is a comedy/action hybrid and while Wright excels at creating a unique film going experience, he also deftly handles both genres and will please fans on both sides of the isle.  The humor in the film is broad as Wright squeezes laughs out of every possible facet of the production.  Whether it is a perfectly placed 8-Bit sound bite, a brilliant sight gag edited in at the exact right moment, or just capturing the perfect tone of O’Malley’s sharp and witty dialogue the humor never falters.  The action in the film is also note perfect as Wright captures the insanity of O’Malley’s brawls and even creates some flourishes of his own.  The fights are long and furious, with Michael Cera doing a lot of the grunt work and handling the action bits with ease.  Fighting game fan’s will giggle with delight at Scott’s juggling skills and even more credit should be rewarded to Wright for making the musical fights in the picture just as compelling and engaging as the fisticuffs.

Speaking of the music, it works wonders for this film.  Beck, Metric, and Broken Social Scene helped bring the bands of the film to life as each wrote the music for Sex Bob-Omb, Clash at Demonhead, and Crash and the Boys, respectively.  All of their music will get your toes tapping and I can honestly say that I would gladly listen to any of the songs over and over again on repeat for hours upon hours.  The cast also does a great job at filling in for the artists who composed the music with Brie Larson really shining as Envy Adams, the lead singer for Clash at Demonhead.    I want this soundtrack yesterday!

Let’s continue with the praise before I get into my minor quibbles with the film and discuss the superb cast.  Michael Cera is Scott Pilgrim and while a lot of people will just say he is playing Cera again, if you have read the books you can really appreciates what Cera did to capture the character.  Kieran Culkin as Scott’s roommate Wallace Wells could have been in the film countless more times as everything he said was almost instant comic goal.  Also, props to Wright for making Wallace’s sexual endeavors even funnier in the film than they are in the books. Allison Pill and Mark Webber round out the rest of Sex Bob-Omb and are great in every moment they get; I just wish there was more of them.  Ellen Wong also announces herself with authority as Knives Chau and she is a force to be reckoned with as she faints and screams her way through her obsession and love of Scott Pilgrim and Sex Bob-Omb.  All of the evil-ex’s fit perfectly with O’Malley’s source so well that you almost wish Scott didn’t turn them to change.  I applaud Satya Bhabha, Chris Evans, Brandon Routh, Mae Whitman (her?), and Jason Schwartzman for creating such memorable characters with such little screen time.  Anna Kendrick, Aubrey Plaza, Brie Larson, and Johnny Simmons round out the rest of the cast and are all solid throughout, but I again wish we got more time with them.  The only question mark in the cast for me is Mary-Elizabeth Winstead as Ramona Flowers.  After the first time through, and there will be plenty more viewings, I found her performance hard to really put a finger on.  I don’t know what it is, but that might be the point as Ramona is supposed to be a hard cookie to crack who runs from drama at any sign of it.

This brings me to my issues with the film which might not really matter to most of you readers out there as it has to do with the adaptation process.  Now, I know, I know, “you have to make changes when you adapt.”  I understand that, honestly, I do, but that doesn’t mean I have to like it all the same.  Now, through the first three ex’s I would agree with a lot of the hyperbole out there at the perfection of the film.  From the tone, the dialogue, the fights, the pacing, and the brilliant editing of Wright and company it is all working in spades.  This portion of the film also just happens to be about as literal as an adaptation of Scott Pilgrim could be adapted to the silver screen; so obviously I loved it.  But once evil-ex number three is dealt with the film is almost put into fast forward as the next three ex’s get polished off rather quickly and before we know it we are at the Chaos Theater (now open in Toronto!).  The third evil ex’s demise was as far as O’Malley’s books had been released when Wright and Michael Bacall had to pretty much lock in their script and you can tell that they kind of streamlined things once O’Malley’s source material wasn’t there for them to mine for the moments in between the fights.  And that is why I love Scott Pilgrim, both the books and the film, the moments inbetween the fights.  Sure the references are great and the action is a blast, but it is those moments when Scott is hanging out with his friends and Ramona in all their honest silliness that I enjoy the most and that disappears in Wright’s third act.  Again, I can’t give a true final assessment of an adaptation until I have seen it at least twice, as I have to gradually separate the two mediums, but it will be interesting to see how the third act grows (or regresses) on future viewings.  That said, I thought the handling of Evil Ex’s 5 & 6 was superbly done and was a brilliant mesh of music, gaming, comics, and film.

One last bit on the adaptation in that I think O’Malley’s final act, Vol. 6 in his series, is superior to Wright’s when it comes to Scott Pilgrim’s adventure.  And the fact that I still think Wright’s is a lot of fun is a testament to O’Malley’s work in Scott Pilgrim’s Finest Hour.  But we will get into this in a later conversation as it would be far too spoiler heavy to get into it here.

In the end, Scott Pilgrim vs. The World is a rare feat of film making in that Edgar Wright has created a film that is unique and original to the medium.  Its look, energy, and sense of fun will probably go unmatched this year as it faithfully brings the precious little life of Scott Pilgrim to life with relative ease.  While it easily sits up there with my favorite films of the year, I am not quite ready to through it into the upper echelon, but all that might change once I sort out my own issues with the adaptation process which honestly deserves heaps of praise.  I am just one stingy bastard when it comes to properties I love, especially one that is so fresh in my head right now.  Either way, I can’t recommend the film enough as it is a technical marvel, full of great laughs and action, and is a unique experience you can’t get anywhere else but the Cineplex.  Edgar Wright is now a resounding three for three and I can’t wait to see what he cooks up next.

Scott Pilgrim vs. The World is an A-