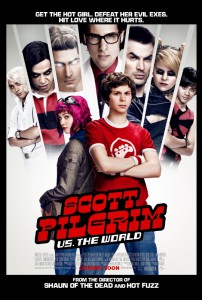 Scott Pilgrim vs. The World is a film by Edgar Wright based on Bryan Lee O’Malley’s comic series by the same name.  I was not sure what to expect when I walked into the theater but was pleasantly surprised by what I saw.  The movie was well written, well acted and a completely original take on comic book films.

Scott Pilgrim is a 22 year old completely unaware young man dating a high schooler.  He is in a band, Sex bob-omb, lives in a studio apartment with his roommate, Wallace, takes advice from his younger and more mature sibling, Stacy and is just generally floating through his life.  Scott sees Ramona at a party and is immediately infatuated.  After their first date, Scott finds out about Ramona’s league of seven evil exes that he must beat in order to date her.

Edgar Wright manages to bring the world of Scott Pilgrim to life using pop-up graphics and creating a video game/comic vibe that is completely original and visually stunning.  I was especially impressed by how well the graphics fit into the movie adding to its charm rather than making it cheesy and unbearable as I had feared.  I was happy to see that Scott Pilgrim was funny, entertaining and charming.  It is one of the best movies of the year and I would recommend it to anyone.

Scott Pilgrim is a A