Another Take By Zac: Film Review: Rise of the Planet of the Apes 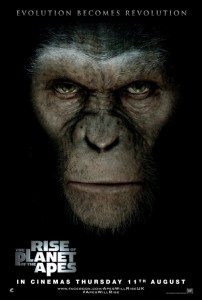 Rise of the Planet of the Apes is one of the finest entries of the summer, features a phenomenal performance by Andy Serkis, and features some of the most impressive special effects integration from WETA yet.

The Planet of the Apes series is forty plus years old and has finally caught up to the technology that can take the concept to its possible heights.  Rise is definitely on its way to said heights and it does so through technology and the excellent characterization of our lead, Cesar.  Cesar is a rescue from an Alzheimer’s lab that is doing testing on apes.  Cesar is the son of an ape that had been given a successful dose of a drug that had enhanced her mental capacity and it has passed along to him.  Raised in the home of Will Rodman, more or less as an equal human, Cesar flourishes intelligently and develops a lot of human traits and abilities.  Rodman is a lead researcher in the Alzheimer’s lab and he has been developing the next evolution of the drug that gave Cesar his intelligence.  Will is driven by the need to try and cure his dad who suffers from the disease and saw results using the same strain as Cesar.  Will thinks he has a breakthrough on the new drug line just as the original starts to fail on his father, but the results have unexpected affects on both apes and humans.

Let’s get the rough parts out of the way first.  The humans are no where near as complex and developed as the apes in the film but it isn’t told from their perspective; so it makes a little sense.  The most complex human character is Will and this makes sense since he interacts with Cesar the most; though I will say that Will could have had far more complexity.  The biggest offenders on the human side are the completely contrived and one note villains in the mean sanctuary worker and the executive at the research lab.  Both of these guys are evil for the sake of being evil and have no other reason to be in the film.  Thankfully, they are peripheral characters and don’t hinge the plot in any way; and the payoff on Tom Felton’s sanctuary is worth him being a giant ass.  The cast in the human actors’ arena are all adequate; they just don’t have a whole lot to do.  James Franco and John Lithgow get the most to work with in the script as they play Will and his father, respectively, but I wish these talented guys had a bit more to do.  Freida Pinto and Brian Cox on the other hand get next to nothing to do.  Other than the weak human characterization, I kind of wished there was a bit more action.  But that is a minor complaint that I am sure the sequels will quell and isn’t really a big deal here since the action is so well executed in the finale.

The acting standout is Andy Serkis as Cesar, whose performance is captured on set through performance capture and animated into the Cesar we see by WETA.  The face and inflections from Cesar are all taken directly from Serkis’ performance, as are his movements that are captured through motion capture.  Serkis and WETA make us feel and connect with Cesar unlike any digital creation since Serkis & WETA’s team up in King Kong.  Serkis delivered one of my favorite performances of the year so far and I suspect he is going to be right up there when the year is out.  Karin Konoval, Terry Notary, Richard Ridings, Christopher Gordon, Devyn Dalton, Jay Caputo are the other apes with significant roles and they all do a fine job as well, enough so that we have an emotional reaction to their possible death/survival in the finale.

WETA just really out does themselves here though with an amazing integration of CGI into live action.  The apes look photo realistic and hold up under the closest of close ups, it is breathtaking.  You forget you are watching CGI on a number of occasions it is so good.  The action scenes at the end are an excellent look into the capabilities of performance capture being able to be integrated into massive live action scenes and the fact that it looks this good already is a great sign for future releases.  WETA can’t be applauded enough as ILM and them drive the digital medium forward into realms beyond our imagination.

Rupert Wyatt’s direction is a marvel and his ability to tell a compelling story with no dialogue, other than a little caption signing, is quite the accomplishment.  In fact, the sanctuary scenes are the stand outs, maybe even over the finale, as we watch Cesar evolve into the leader he ultimately becomes.  All of this tension and infighting is conveyed just through the apes’ faces and everyone involved does an amazing job to pull it off so convincingly.

In the end, Rise of the Planet of the Apes is a summer blockbuster that has great effects and action but also has a heart in the evolution of Cesar.  Seeing the beginning of the uprising from the apes’ perspective allows us to root for them and get behind the disturbing nature that apes are going to overthrow humans.  Where this series is going to go is incredibly intriguing as Rupert Wyatt has proven himself to be quite the director to watch.  His integration of effects with live action and making a CGI character so compassionate are promising for where film is heading and I can’t wait to see where he and Serkis take the series.

Rise of the Planet of the Apes is an A-