Another Take By Zac: Film Review: Pirates of the Caribbean: On Stranger Tides 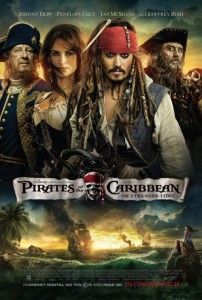 Pirates of the Caribbean: On Stranger Tides is a less fantastical experience then the previous films but if you are a fan of Jack Sparrow and the series I am sure you will find some fun in this picture.

Will and Elizabeth are gone and we pick up where the last few moments of At World’s End left off, with Captain Jack Sparrow on the hunt for the Fountain of Youth.  Things were left leading us to believe that the race would be between Barbossa and Sparrow for the fountain, but a bit of convoluting has gotten The British and Spanish thrones involved, along with the legendary pirate Blackbeard.  In fact, our adventure begins in England where Jack is attempting to rescue Gibbs, who is accused of being Sparrow, while Jack also tracks down an impostor claiming to be Sparrow; whom is also recruiting a crew for a mysterious mission.  Barbossa is working for the English Throne, Sparrow’s ex is rolling with Blackbeard, and Jack finds himself, again, in a mix of allegiances we might not be able to keep track of.

Luckily we can keep track of things as the film is not nearly as convoluted as the last two sequels got at times.  The film is just as full of exposition and bloated plot points as its predecessors, so if it hasn’t bothered you before I don’t know why it would start to now.  Where the film does pale compared to the previous entries is a lack of mystical/fantastical elements that littered the first three films.  The film has dashes of the fantastic that are kind of cool, and the central plot point does revolve around a potential eternal draught, but don’t expect any ghost pirates or sea creature people to be walking around.

The film does remain fairly fun though, especially if you enjoy Jack Sparrow.  Depp is great as the character, as usual, and I can enjoy just about anything with Sparrow.  The film is also basically the Jack Sparrow show, as he is in almost every scene, and it is only in the end that things get a bit divided to the secondary characters.  The new love birds the film introduces are an all right diversion but we aren’t nearly as invested in them as we were with the Will/Elizabeth relationship.  The priest and mermaid are secondary characters and luckily Rob Marshall doesn’t try to elevate them anything much beyond that.  I will say I was disappointed that Gibbs was back and not stuck on The Black Pearl.  The bit with the fate of the Pearl is quite cool though and it makes me wish they embraced the fantastic a bit more.  Though outside Gibbs, Sparrow, and Barbossa don’t expect any familiar faces, and that isn’t really a bad thing; like I said, I didn’t need Gibbs.

The new faces are a mixed bag with Blackbeard not coming off nearly as menacing as they had hoped for. I don’t think this is the fault of Ian McShane; the film just doesn’t give any big scary moments to cement his villainy.  In fact we only assume Blackbeard is not to be trusted because of our assumed reputation of the character in history.  More successful is Penélope Cruz’s Angelica, who isn’t quite the fireball Cruz is capable of but a lot of fun nonetheless.  She bounces off Depp with ease and the two have a believable history, she also looks fantastic.  Geoffrey Rush is fun as Barbossa again and I am happy to have him back along with Depp; they were the best parts of the previous trilogy. The aforementioned priest and mermaid characters don’t really show up till the second half of the film and their romance is easy and unbelievable.  Sam Claflin and Astrid Berges-Frisbey make the most of their respective parts but the characters remain barely memorable.  The mermaid effects were particularly cool though, the changing from human and back again are done extremely well.  The effects work is stellar and not very showy, but again I wish there was a bit more spectacle.

In the end, Pirates of the Caribbean: On Stranger Tides is a fun feature for Jack Sparrow fans, but not without its short comings.  Featuring a solid cast and the two friendly faces we wanted to see again the film is adequate summer fun and about what you would expect from a pirates movie.  While not as good as the first film, Stranger Tides is as a whole probably as good as the third film, but lacks any of the spectacle the grandest moments of At World’s End has.  If a fan of the series I am sure you will enjoy it, but don’t expect the film to win over anyone new.

Pirates of the Caribbean: On Stranger Tides is a C+

P.S. The 3D has a couple cool shots but don’t fret not being able to see in 3D; save cash if you need to