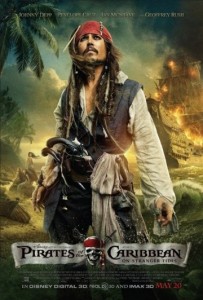 It has been almost eight years since we were introduced to the most recognizable swashbucklers of our time in the Pirates of the Caribbean series. 2003’s ‘Curse of the Black Pearl’ was a smash hit, and in 2006 and 2007 ‘Dead Man’s Chest” and ‘At World’s End’ took us on a fun ride if nothing else. Now almost four years later, we set sail for a new adventure. Some of the same cast is back, along with plenty of new crew members. But is the fourth movie an adventure even fit to scrub the poop deck with?

Captain Jack Sparrow (Johnny Depp) has started to hear rumors that he is organizing a crew to set sail on an adventure to discover the fountain of youth. He eventually finds out that that the expedition is being lead by his former girlfriend Angelica (Penélope Cruz), who is recruiting sailors for the cause. The two of them end up on the “Queen Anne’s Revenge,” the vessel belonging to the infamous and highly revered Blackbeard (Ian McShane) himself. Jack finds himself competing against the British, lead by none other than Captain Barbosa (Geoffrey Rush) as well as the Spanish, who are both also looking to find the fountain.

This is the first film in the ‘Pirates’ series to embrace 3D technology, like most other blockbusters are doing this year. They join “Thor,” “Harry Potter and the Deathly Hallows Part 2” and “Transformers: the Dark of the Moon” to name a few in doing so. Unfortunately the problem is that many of the scenes in the movie take place at night and are very dark, so the 3D doesn’t pop like you would hope it would. “Pirates 4” was shot in 3D rather than converted post production. I will give them that, but it really didn’t add much to the experience as it seldom does to live action films. Many of the effects that stood out were gimmicky during poorly shot action scenes, where the 3D was shoved down your throat. They should have just left it alone instead of making the already dimly lit scenes look even darker from wearing the glasses. 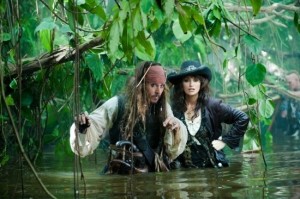 Unfortunately, as interesting as the story might seem, the film is dreadfully boring. Each scene drags on more than the next, leaving you checking your watch for time constantly. This film is the shortest of the four in the series, yet ultimately feels like the longest. Part of the problem is that you never really care about any of the characters, and there isn’t much conflict during the whole thing. The first three movies always kept a pretty steady pace, and it seemed like there was a lot going on at all times. In ‘Curse of the Black Pearl,’ Jack is trying to recover his ship from Barbosa, while Will is trying to rescue Elizabeth at the same time. Meanwhile, Commodore Norrington is trying to track them both down, and we learn that Barbosa and his men are cursed to live forever as the undead. There is a lot happening there. And the same goes for the two sequels that came after. But in this film, things seem so linear and uninteresting as they keep trudging forward towards the fountain, with nothing else of interest really ever going on.

The action scenes throughout the entire film were so rigid and unexciting that they really seemed awkward more than anything else. When Jack is captured and forced to participate in the pursuit of the Fountain of Youth, he makes a “daring” escape by evading the guards – which looks like something out of a “Three Stooges” episode. The scene pales in comparison to his escape from Norrington in the first film. Then when we are introduced to Angelica for the first time, her and Jack have a sword fight where it looks like he is fighting against his double. The entire thing looks so lazy, and is very poorly lit as well. The scene reminds me of the fight between Will and Jack from during the first film in the blacksmith shop, yet with far worse choreography. These scenes, like most of the other action in the movie, just felt like they didn’t really try.

Johnny Depp plays Jack Sparrow just as well as ever, but it isn’t enough to carry an entire movie. Personally, I am a fan of the character and thought that he was one of the best parts of the entire series. But after seeing this latest film, it appears that he makes a much better side character than he does the lead. In the previous movies, he provided the comic relief and lightened the mood where needed. Yet during ‘On Stranger Tides,’ it felt like the humor didn’t come off as well. Most of the jokes fall flat this time around, and it appears that the writers tried much too hard to implant instances where the audience is supposed to cheer. 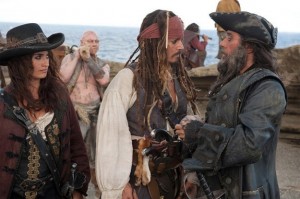 One of the biggest problems with this latest ‘Pirates’ film is that the villain just isn’t menacing enough. Before we are introduced to Blackbeard, we hear just how evil and terrifying he is. But when we finally see him, there isn’t really anything there to make him seem so intimidating. In the first film, Geoffrey Rush played a great bad guy who was undead and seemed larger than life. Then in ‘Pirates’ 2 and 3, Davie Jones was an evil, boisterous and bizarre villain who was quite interesting due to his appearance. In this movie, Blackbeard seems to be a let down. I don’t think that Ian McShane was cast properly for the role.

Although it’s hard to see a fun series turn into a cash cow, unfortunately that is where we are left with “Pirates of the Caribbean: On Stranger Tides.” The premise behind a search for the fountain of youth sounds good on paper, but just wasn’t executed properly by the writers and director Rob Marshall. What once was thought of as a fun series, packed with plenty of excitement and adventure has, unfortunately, fallen flat and become safe. The fourth film in the series depends too greatly upon fans loving it and the characters simply because of its predecessors. With a slow moving pace and terrible action that make it feel much longer than it actually is, a pirates’s life seems much less interesting than it once did almost a decade ago.

“Pirates of the Caribbean: On Stranger Tides” is a D