Another Take By Zac: Film Review: No Strings Attached 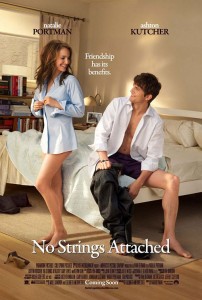 No Strings Attached is a solid and against type rom-com for the first hour or so of the film before divulging into cliché and loses a lot of the good will they earned in the start.

Emma and Adam have been crossing paths for years now. From the first time he tried to finger her at camp to a fuck buddy relationship that this film revolves around. The twist on the formula is that Emma, not Adam, really doesn’t want anything other than sex out of the relationship. Closed off and a life long loner, Emma, never seems to let a relationship work and she really enjoys her physical only relationship with Adam. Adam’s feelings start to get the best of him though and their deal begins to crumble under the new expectations.

Now, flipping the uncommitted role onto the female is nothing new or drastic for the genre. The film works at first because it embraces the R rating and is full of a number of funny supporting characters. Kevin Kline, Greta Gerwig, and Jake Johnson provide the film with its most laughs and this is even partially due to some clever writing. Relying on its words more than anything, the film’s R rating isn’t in gross out gags but rather profane jokes. The humor is finely injected into the more poignant and quiet moments along the way as well.

The relationship between Emma and Adam plays out nicely and realistically as well and it was easily to believe how these two were carrying on. From Adam’s feelings to Emma’s distancing nothing is forced or outlandish form the sake of plot. It’s when the characters go on their first date that things start to unravel. Clichés rear their ugly heads, people start believing the complete opposites of their convictions, and the film reaffirms the ridiculous notion that every girl will forsake what they believe in for the right guy. Not to mention the film ends on two horrendous notes; a terribly cheesy line (that sounds complete out of place given the established language of the film) and an awkward slow mo shot that suggests they are seeing something profound and amazing that we never see.

The actors in the film are all quite solid and this considerably helped elevate the better parts of the film. The aforementioned trio are all quite funny and all could have been used more than they were; Kline particularly. Natalie Portman plays Emma and does a fine job playing the role she is given here. In fact she gives one of the better female rom-com lead turns in a while. Ashton Kutcher dials things back and is pleasantly enjoyable as the straight man of the film. Nice to see him not get all crazy and go over the top like he would have in years past. Mindy Kaling, Olivia Thirlby, and Lake Bell also do fine and humorous work as well in their supporting roles. The oddest bit of the cast is Cary Elwes who gets fourth billing and barely is a presence in the film. I love Elwes and wish he had more to do but I can’t figure out why he was here.

In the end, No String Attached is a solid romantic comedy up front but is plagued by being like everything else in the genre in its final act. A funny and fast moving film is ruined by a clichéd third act which keeps it from being as wholly successful as last year’s similarly toned, Going the Distance. Either way, you could do far worse in the genre as there are plenty of enjoying bits in Ivan Reitman’s film. If only he kept things real like his son, Jason has in his excellent feature films.

No Strings Attached is a C