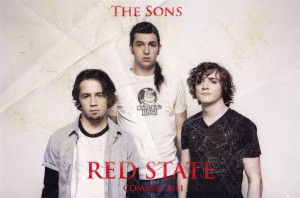 Some movies hit you with both barrels right out of the gate…and some directors have such a keen way of expressing themselves that you sit up and notice.  Red State does both, but fails to keep you truly interested.  Directed by Kevin Smith, it is a cautionary and fearful tale of religious fevor gone terribly wrong.  The film starts off following three young boys off for a sexual romp.  Kind of like a throwback to the Porky’s movies in the eighties.  From there Smith takes a drastic u-turn, and we are led down a terrifying road of kidnap and terrorism in our own backyards.  The movie is quite violent and leaves nothing to the imagination.

While I normally am a huge fan of Smith’s dead on sarcasm, he just felt out of his league on this film.  We have come to expect fun and comedy and instead he dives deep into some of our secret fears, as well as using quite a few stereotypical moments to inject storyline into the picture.  And as he was introducing the film at Sundance, he even says “this film is not funny…it’s [email protected]$king pure terror”.  I will admit there were a few jump out of the seat moments, but the rest of the film was disappointing.  Smith interjects some humor here and there, but for the rest, he loses pacing and the film gets very drawn out and boring.  The one bright moment is Michael Parks, who completely immerses himself in his character.  You never have any doubt as to his intentions.  On the other side of the acting coin is John Goodman, who seems to be lost throughout the entire film.  His lines are delivered more like he was reading them to himself in a mirror than actually conversing with another human being. 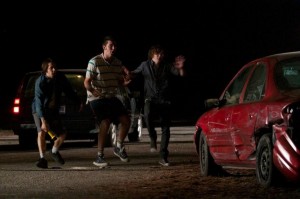 Rumor had it that Smith was going to attempt to auction off the distribution rights after the film showed, but it turned out to be a bit of humor on his part.  He told the audience that he plans to distribute the film himself.  If the protesters outside were any prediction, he won’t find many places willing to get it on screen.  Smith should go back to the sarcastic humor that he does best, and leave these kinds of films to others.