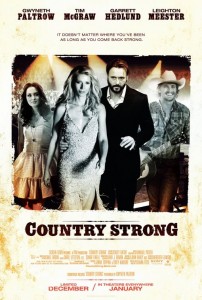 Country Strong is a mess of a film with a horrendous script that goes nowhere, has no character depth, and feels like elaborate audition tapes for Paltrow and Meester’s potential music careers.

The film follows Kelly Canter, a country music superstar, who is on the road to recovery in rehab when she is checked out early by her husband/manager for her comeback tour.  Kelly uses this opportunity to get one of her nurses at the facility a shot at stardom.  The nurse, Beau, is a local bar star who Kelly has bonded with in her time there and has become a fan of his work.  One wrench thrown into mix is a young beauty queen, Chiles Stanton, who is trying to become the next Kelly Canter.  Kelly is a bit wary of Chiles due to her husband’s particular interest in Chiles and the fact some young minx trying to steal her spotlight.

The film takes place over a mere week or two but they try to cram so much crap into this movie it is ridiculous.  There is like a love quadrilateral going on, a baby-killer subplot, song rights betrayal, alcoholism issues, make a wish, young love, artistic breakout, fandom, and plenty more.  And guess what, none of it really works.  There is no depth to any of the ideas and it feels like scattershot emotional hooks they try to pull you in on.

Beyond this, once the film hits the road for its tour, a whole 3 dates!, the film just loses any sort of structure.  People are sneaking around and running off and we are supposed to believe no one is noticing what is going on?  Or do they know what is going on and just don’t care? I honestly don’t know and I couldn’t tell what the characters do or do not know; it’s sloppy.

The two highlights of the film are the soundtrack and a scene towards the end of the film involving Make a Wish.  I am not a fan of country music and wasn’t turned off by anything thrown at me in this film; and there are a lot of songs for you to chew on.  The film also does a good job of varying the country styles of music they put on display and fans of the genre will be pleased; you get a little bit of everything.  The Make a Wish moment is just a touching and fantastic sequence between Paltrow and a young leukemia patient that can’t help but touch you.  You just wish the film had that heart in any other element in the picture.

The acting in the film is actually pretty good among three of the four leads with Tim McGraw being the weak link.  While by no means awful he just doesn’t have the ability to emote or hold a candle with any of the professional actors in the film.  It is probably best if he doesn’t try to take such intricate roles from here on out.  Garrett Hedlund does a fine job in a fairly straight forward role but conveys the sexy southern swagger more than convincingly.  The character has no arc or real depth but Hedlund easily crafts a likable lead.  Hedlund, along with Paltrow and Messter, did an excellent job of singing his parts as well and helps the musical moment’s standout in this awful movie.  Leighton Messter is cute and sweet as the naive young star but like Hedlund doesn’t get a whole lot to do.  She elevates her character above what is written on the page but she can only take it so far.  Paltrow does the best work in the film but she has a couple shaky moments as well, but this is probably more due to her having an awful script to work with.  She plays a great drunk but even she can’t sell the completely insane irrationality of the character.

In the end, Country Strong is a mess of a film that is punctuated by one of the worst third act moment I have seen in some time.  One of the characters makes a decision so out of leftfield that makes absolute no sense I wouldn’t to laugh when it happens.  Just an awful decision to end the characters arc and one I will make fun of for years to come.  Hedlund and Messter are the real leads of the film and they are fine enough to watch but the film mixes them in with this crazy country singer comeback plot that creates this mess of a movie.  Either way, avoid the film if you can and check out the soundtrack if you are a country music fan as it is a nice assembly of songs.

Country Strong is an F