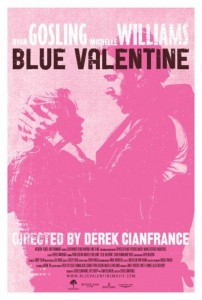 Blue Valentine is a kind of sweet/kind of sad, beautiful, and honest look at relationships that is driven by wonderful direction and amazing turns by Ryan Gosling and Michelle Williams.

Following a young couple through the beginning and possible end of their relationship is where Blue Valentine takes us and the juxtaposition of these timelines is handled perfectly.  The film is just a marvel from start to finish and as honest as a romance can be on screen.  Raw and cutting no corners in showing these two’s emotions the film’s frankness will certainly surprise some.  Getting into the plot of the film doesn’t help much here as there isn’t a plot per say.  We follow the couple, Dean and Cindy, over a couple of days in the “present” in which their missing dog sparks a night out and a series of conversations that tries to get them to the bottom of their relationship.  This is played against the origins of their relationship a few years back in which Dean and Cindy meet by chance and circumstances at the time push them forward faster than expected.

In the background, yet still right in the center of things, is their daughter, Frankie, and she couldn’t be any sweeter of a child.  Played wonderfully by Faith Wladyka, Frankie’s brief scenes in the opening of the film weigh heavily over everything that unfolds over the course of the film and makes you wonder about her fate when the film is over.

The film does mostly everything right but the few things it does wrong is nothing that really hurts the film.  A couple of violent and brash male characters in the film are a bit too stereotypical and one note to be as believable as the fully realized Dean and Cindy, but it is a forgivable short coming.  I also wish there would have been a bit more background to Cindy’s anger towards Dean in the “present” but Michelle Williams performance still clearly conveys Cindy’s feelings.

The things that will stick with you though are the amazing moments between Gosling and Williams.  Whether they are going after one another, falling in love, playing with their daughter, their chemistry is electric.  The banter and dialogue between the two of them was heavily improvised and it allows the two to be extremely natural in every scene throughout the film.  The films sweetness was completely unexpected to me and the flashback scenes would make an incredible raw romantic comedy if on their own.  I wanted to see more of these scenes but that isn’t to say that the “present” stuff isn’t just as compelling.  The rapport between the two never falters and that makes you believe the bond between the two of them that pops up even when they are at each others throats.  The relationship the two craft is a marvel to watch and one that should not be missed.

I have been praising the two stars from the get go but the film is an acting showcase that is one of the years best.  Gosling is incredible as Dean and his ability to make you laugh or smile even in a heated moment is remarkable.  I found myself marveling at his performance in what is easily one of the best of the year.  Williams is as good in her turn as Cindy and she doesn’t flinch in any step of her performance.  Cindy goes through a lot and has some dark places for Williams to go to and she does it incredibly well.  It is really one of the best one-two performances of the year and to miss it would be a mistake.

In the end, Blue Valentine is one of the best films of the year featuring a pair of the year’s best performances.  Derek Cianfrance’s film is expertly crafted and wonderfully assembled and he deserves a great amount of credit for giving this film such a real and natural feel.  Gosling and Williams are the real stars of the show though and are reason why you should seek this film out as soon as possible.

Blue Valentine is an A