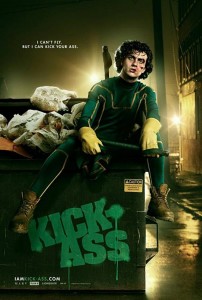 This is another one of those movies that is making me incredibly excited about the prospects of 2010.  My main worry is that the film will cover more than the comic has. It’s been almost two years since I started reading Kick-Ass, and it would kind of suck to not be able to finish the story in the format I started it in.  Oh well, I’m done with my geek rant. I’m not sure if audiences will love this or be appalled by its utter lack of political correctness.  I’m just looking forward to Nicolas Cage being in a role where I don’t hate him every second for ruining what could have been a good movie. I’m expecting this one will be a hit, not on the scale of huge super hero films, but on the same size scale as Millar’s last adapted project Wanted.

Note: I still think Vaughn is one of the most promising directors in Hollywood right now. Too bad he couldn’t stay on X-Men: The Last Stand, it might have been salvageable.