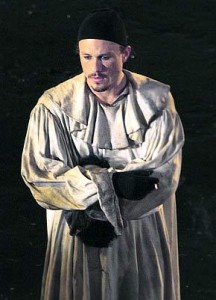 The more I see of this film, the more I want to see it. It makes me feel even more sad about the death of Heath Ledger, it would have been nice to see him complete the role. I’m glad they were able to work around it, and land such talented actors to fill the void. I just hope it doesn’t ruin my suspension of disbelief, since I know why the character changes multiple times. December can’t come quick enough.

Dr. Parnassus has the extraordinary gift of inspiring the imaginations of others. Helped by his traveling theatre troupe, including his sarcastic and cynical sidekick Percy and versatile young player Anton, Parnassus offers audience members the chance to transcend mundane reality by passing through a magical mirror into a fantastic universe of limitless imagination. However, Parnassus’ magic comes at a price. For centuries he’s been gambling with the devil, Mr. Nick who is coming to collect his prize — Parnassus’ precious daughter, Valentina on her upcoming 16th birthday. Oblivious to her rapidly approaching fate, Valentina falls for Tony, a charming outsider with motives of his own. In order to save his daughter and redeem himself, Parnassus makes one final bet with Mr. Nick, which sends Tony and Valentina and the entire theatre troupe on a ride of twists and turns, in and out of London and the Imaginarium’s spectacular landscape.