We are seven episodes into this season and it is going on a mini hiatus until February, so what better time to recap (more like give highlights from) what we’ve seen so far on The Walking Dead.

The season opens with the safe haven, the CDC, in utter disarray after an explosion and the crew is left searching for a new place to go. They run into a massive  line of cars blocking their path and the RV breaks down, so they must find a way through and fix the RV. Before they can go anywhere  a swarm of zombies shows up and they must hide. While hiding, T-Dog cuts his arm on a car and Daryl comes to the rescue when a walker comes after him.  They end up hiding  under dead bodies to avoid the swarm.
While that is going on, a walker makes it’s way into the RV where  Andrea is hiding in the bathroom. It hears her and starts to attack. Dale tosses her a screwdriver through the bathroom vent at the top of the roof  and she stabs the walker in the eye and kills it.  Also in hiding,  Sophia is chased out from underneath a vehicle and she takes off into the woods. Once the walkers pass, Rick and Daryl head to the woods in search of Sophia and encounter a zombie, which they immediately dismiss and search the dead walkers for traces that they may have consumed Sophia and find nothing, so their search continues.

They return to the highway as nights fall and promise to continue their search in the morning, much to the dislike of Carol (Sophia’s mother). In the morning, when they go to leave Carl insist on going on the search for his friend and Rick grudgingly allows it. During the search,  the group hears church bells so they head out to find the church in case Sophia is there, but she isn’t. Shane then tells the group to head back to the highway. Rick doesn’t want to leave the church in case Sophia heard the church bells, so Rick, Shane, and  Carl stay. 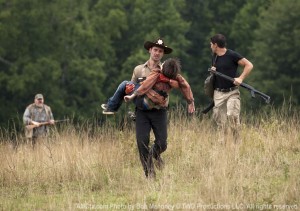 Rick ask God for some sort of sign that he’s doing the right thing. The three of them head into the woods to continue their search when they see a deer in the distance. Rick allows Carl to walk up and get a closer look, and that is when we hear a gun shot in the distance. Both Carl and the deer go down and we are left with Rick screaming and running to his son…..

And that was just the first episode. For the fans, I know I didn’t give every detail from the episode, but I’ll leave it up to you, the reader, to check out the episode if you want to know every single detail, and I’m going to keep the last six episodes short and to the point so you’ll really want to watch them, because honestly I want all of you to watch this show and not just read about it….even though I do like it when you read about it too, especially anything I write!

The second episode starts with a flashback where Lori is sitting outside Carl”s school and a police cruiser pulls up. Shane has to tell Lori that Rick had been shot and Lori faces having to tell Carl.

Cut to Rick running through a field with Carl in his arms, taking instructions from the man who shot Carl, Otis. They arrive at a farmhouse and meet Hershel, who is the owner of the farm and a doctor and they rush him to a bed. Rick is still in shock and offers up his blood as he is the same type as Carl. Maggie, Hershel’s daughter then offers to go find Lori. In the forest, the survivors are heading towards the highway when Andrea is attacked by a walker but Maggie shows up and takes out the walker with a baseball bat and she tells Lori of the news and throws her on the back of her horse and they head back to the farm.

On the farm, Shane and Otis are sent on a mission to find more medical supplies at a local high school. At the high school, they find a group of walkers on the grounds so they throw road flares away from the school to gain their attention long enough for them to get in and get what they need. After receiving the supplies they attempt to leave when they are met by the group of walkers and chased back into the school. 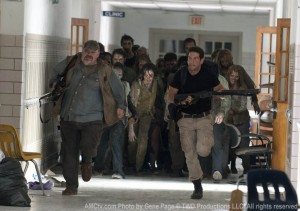 The next episode focuses on Shane and Otis’ escape from the walkers and what Shane had to do to get the supplies back to Carl…which was shot Otis in the leg and sacrifice him to the chasing zombies. The next episode “Cherokee Rose”  we focus on Carl after his successful surgery and the group is setting out to find the still missing Sophia. The remaining members at the highway decide to join the others and leave a message for Sophia at the highway. Hershel also informs Rick that he expects the group to leave once they find the girl. Maggie decides to take Glen with her when she makes a run into town for supplies but before they go Lori gives Glen a list with a “special” item on it.

At the pharmacy, Glen and Maggie separate and while in the feminine hygiene isle Maggie approaches and in a attempt to steer her in another direction hands her the condoms he was grabbing. Maggie then offers to have sex with Glen and proclaims it was a one time thing afterwards. Back at camp, Glen gives Lori her “special” item which turns out to be a pregnancy test as the episode ends with her in a field and the test turning up positive.

The next episode “Chupacabra” brings the return of Daryl’s brother Meryl, in a hallucination that Daryl has after being thrown from his horse and tumbling down a hill into a ravine. Upon his return, Andrea thinks that Daryl is a walker, from a distance I might add, and she fires her weapon grazing him in the side of the head.

Back at the farmhouse, the group sits down for dinner and Maggie passes Glenn a note saying “Tonight, where” and before she can read his response Hershel looks over. Later she reads the note which says in the barns hayloft. This prompts Maggie to rush to the barn to stop Glenn but not before he comes upon the group of walkers that they are storing in the locked barn.

In the episode “Secrets” both Maggie and Lori make Glenn promise not to tell anyone about their secrets but of course at his first chance Glenn tells Dale, who promises to keep the secret. Later Lori ask Glenn to run into town for another “special” item…day after pills. Rick later finds the morning after pill packets and runs out searching for Lori and finds her to find out she threw them up and she is pregnant and that she slept with Shane. 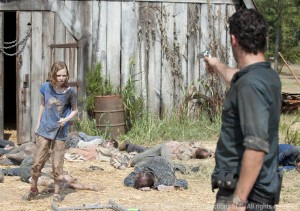 The episode “Pretty Much Dead Already” brought a lot of shocking developments to the camp as Glenn decides to inform everyone of the walkers in the barn. Rick later confronts Hershel about this and Hershel stands adamant that its his house and his rules and gives the group a week to go on their way. Later Hershel takes Rick out to capture a couple of walkers and return them to the barn. Shane rushes to them and starts shooting the walkers proclaiming how they are not human and then shoots them in the head. Shane then decides to break the lock and free the walkers, which causes the group to start a firing line and start shooting all the walkers as they came out of the barn.
Once they think they are done one final walker emerges and its none other than Sophia…in walker form. In shock the group doesn’t shoot. Finally Rick pushes through the line (Which he didn’t participate in) and puts a bullet in Sophia’s dead head.

So there is the season to this point. Is it as good as last season? Worse? Better? What do you think?

I personally think it has been a little less action packed this season but the compelling story has made up for the lack of zombie kills. Overall I have enjoyed this season more than last and can not wait until it comes back on February 12th….late birthday present for me!!!!

Here’s a Sneak Peek of the next episode “Nebraska”