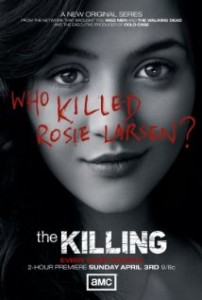 Episode Eight “Stonewalled” starts with Detective Linden having all the photos, which have been heavily guarded, e-mailed to her. She again tries to contact her fiancé but to no avail. Later, the FBI is taking control of all of the evidence, basically taking the case away from Linden and Holder. After that, it is revealed that Principal Meyers is putting Bennet Amed on a temporary leave of absence. Photos are released of Rosie’s body and other things.  We find out that Linden’s son sent a bunch of the photos to his friends and they subsequently got released to the public.  After seeing two of the photos on the news, Mitch leaves the Larson boys in a running car. We then find Jaime receiving pivotal information that would help with Councilman Richmond’s quest to become the Mayor of Seattle. Linden was suspicious of Holder releasing the pictures because of his shady dealings, and she finds out that Holder is in drug rehab and his dealing have been with his sponsor.

Later, Darren Richmond decides to release the information about Mayor Adams after he sits through a heartfelt meeting with a lady who had something to do with his wife’s death. Stan confronts Mitch about the car situation and she immediately turns Rosie’s death back on him. We learn that Bennett’s phone is tapped and Linden and Holder set out to wait and see if Bennett makes a move to help them put a warrant out to search his apartment and arrest him. Once they set out on this mission, they turn to Bennett on the telephone speaking to someone and saying “Don’t worry about the police they don’t know anything” and his wife overhearing that in the background. The episode ends with Holder receiving a phone call regarding the phone tap.

So the rollercoaster that is The Killing keeps going up and then back down again. This week was another of the less entertaining episodes, but at the same time you get pivotal information regarding the show. Such as, Darren Richmond finally going on the offensive in his run to become Mayor of Seattle, Bennett giving us more information to put him as a prime suspect, and Mitch continually struggling to deal with her daughter’s death.

Now, for me, the show is continually losing steam. It seems like they are filling episodes because AMC gave them thirteen episodes to work with and the writers just couldn’t write thirteen solid episodes. I do still like the show but think after the first couple of exciting episodes, I wasn’t expecting it to go downhill from there, and I truly am hoping that the show gets better from here or I don’t see it coming back to AMC.

So, with all that being said I am still, surprisingly, looking forward to next weeks episode because the trailer looks like it may be one of the more exciting episodes and I am hoping they can regain the steam that they have lost with me.