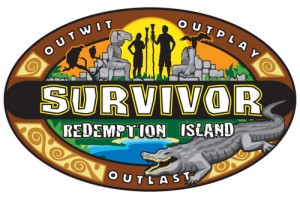 This season has been one of the best because of the Redemption Island aspect, which allows competitors to return to the game once they have been voted out. This season has just had more drama then any season that I have ever watched. This season re-caught my attention after I had kind of given up on it, basically because this was season 22 and I felt they hadn’t done anything unique to impress me for a while.

Once Andrea returned to camp, she immediately tried to gain the girls votes and tried to vote Rob and Phillip out. Rob still had every intention of voting Ashley out the first chance that he gets and he relays that to his team. At the challenge, the competitors competed to be the first to complete a puzzle to 100 where they had to capture four bags with numbers while running across a balance beam without falling off. It eventually comes down to a race between Andrea, Rob, and Ashley with Ashley winning her second straight immunity challenge. When returning to camp, Andrea continues to make her pitch telling the girls that she is voting for Rob at Tribal Council. Then Rob tells everyone that they are voting Andrea out. At Tribal Council, Rob decides to play the immunity idle that he has, just in case the girls united, which they didn’t and Andrea gets voted off with a Four to One vote, becoming the latest member of The Jury.

Back at camp, Rob assures Natalie and Ashley that they are going to the final three with him. At the final immunity challenge the contestants are forced to navigate through a maze and retrieve pieces to complete a puzzle. Again, it eventually comes down to Rob and Ashley but with a change in winners this time when Rob completes the puzzle first and locking himself into the final three. Back at camp, Rob tells Phillip and Natalie to vote for Ashley. Then, he goes and assures Ashley she’s safe and tells her to vote out Phillip. At Tribal Council Rob completes the final backstab when Ashley becomes the final member of The Jury and the last person voted off of Survivor.

With the final three set as Rob, Natalie, and Phillip, they now set out to convince The Jury that they should be the winner of Survivor: Redemption Island. At the deliberation the Jury hits hard on Natalie’s following of Rob and the way that Phillip has played the game. David is last to question the contestants and he immediately turns to the other juror’s and gives his lawyerlike speech as to why it would be stupid to not vote for Rob to win this game. 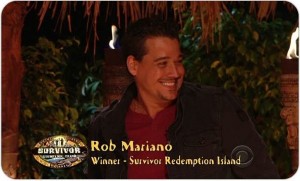 They then proceed to New York City for the Live Finale where the winner is anticlimactically revealed to be Rob Mariano, who wins the game on his fourth attempt and 117 days on Survivor. From that point Rob goes and greets his wife Amber, who also won Survivor All Stars. On the Reunion Show Phillip finally apologizes to Steve for calling him a racist saying it was his only mistake on Survivor. Other than that the only memorable things from the Reunion were: Russell basically saying that he would take the call if Survivor called again, Phillip being revealed as an actual Federal Agent, Ashley and Natalie knew Rob had an Idol, and David going into the audience and proposing to his girlfriend, former Survivor: Tocantins contestant Carolina, making him the second contestant to propose on the Reunion Show, with the first coincidentally being when Rob proposed to Amber after she won Survivor: All Stars. Oh Rob also won the fan vote giving him $1,100,000 all together.

I felt that the girls could have made a serious move if they had attempted to get Rob out. I know he had the idol but if he would have seen his name he may have gotten a little more scared and be flustered going into the final immunity challenge. I mean, I loved how Rob played the game but he had a little too much control and I thought it would have been very interesting to see if his minions turned on him. Even with Rob winning I still loved everything about this season. I felt Matt had by far the toughest road and I was thoroughly impressed by how long he lasted with being on Redemption Island for almost a month. I also am still moved by what Mike did when he gave up his family time so that the Ometepe tribe could spend time with their respective families. I just loved to see that there are still great people out there that think of the benefit of others before they even consider themselves.

I am really amped for the coming season of Survivor: South Pacific where they will return with the Redemption Island aspect and they will also bring two former contestants back once again. The season is set for Fall 2011. If I had to predict it I would assume that they will have Coach and Phillip face off. I would enjoy it if they brought Johnny “Fair Play” back or even Rupert. Anyway you look at it next season should be entertaining and hopefully as good as Survivor: Redemption Island.