ALONE YET NOT ALONE Opens Friday, June 13! See It at Wehrenberg Ronnie’s 20 Cine! 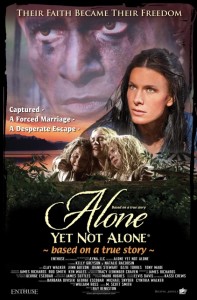 The movie stars Kelly Greyson (Return To The Hiding Place), Jenn Gotzon (God’s Country, Frost Nixon) and musician Clay Walker (“Jesse James”). It is based on the true story taken from the novel of the same name by Tracy Leininger Craven.

ALONE YET NOT ALONE uses a new ticket reservation system called Seatzy™, which puts film lovers in control of bringing new movies to their cities. For this film you can visit www.seatzy.com/alone for tickets.

Synopsis: The year is 1755, and the English colonies are being ravaged by the atrocities of war.

Opposing European powers have clashed over the fertile Ohio valley, and entire families are devastated by the ensuing violence. Hostile native tribes are raiding the vulnerable frontier farms, and two young sisters are among those taken captive.

While hoping for rescue and return to their home, they are comforted with the words of a family hymn: Alone Yet Not Alone. But when the sisters are suddenly and cruelly separated, their tender faith is brought to a stretching point.

Forcibly immersed into a primitive foreign culture, the older sister, Barbara, clings to her beliefs. Yet now a deeper fate threatens, and she makes a difficult decision: to risk her life in an attempt to escape.

Pursued by a relentless and cunning warrior, Barbara and her three fellow captives must cross over two hundred miles of raw wilderness in their effort to reach friendly territory.

Will their courage and trust in God be enough to see them through? And if they do succeed, will they find their family? Will Barbara ever see her sister again?

For more information about ALONE YET NOT ALONE, visit www.aloneyetnotalone.com.