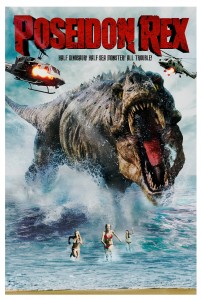 When I was nine, my mom bought me the novel Jurassic Park. The film had just come out that summer and took the world by storm. Granted, I was a nine-year-old reading a techno-thriller intended for adults, but I still fell in love with the concept of dinosaurs. Nevermind that I could barely comprehend half the words in the book. It was all about the tyrannosaurus rex. Rexie stole the show.

Fast forward 20 years, and the advancements in CGI mean the dinosaurs should be more realistic, right? We should be able to make life-like dinosaur models on our damn cell phones. Meanwhile, as the world anxiously awaits the release of Jurassic World, we have to turn to smaller, lower-budget quality dinosaur films to tide us over. Poseidon Rex is not one of these. Poseidon Rex is a great film if you hate your life or are family of one of the cast.

The film opens with Jackson Slate (Brian Krause) and two other dudes whose names we never find out, meaning they are likely going to die pretty quickly. You may have heard Brian Krause’s name before; he was in the TV show “Charmed” years ago. If you haven’t heard from him since and are worried he’s just doing films like Poseidon Rex for a paycheck, don’t worry. He was also in the seminal Milf Money, a short film whose tagline reads “Nothing sucks like a single mom.” Being the curious person that I am, subsequent Googling of the term “milf money” resulted in finding nothing informative but ending up with a lower credit score and having to immediately clear my search history. Jackson Slate is also the only role listed with a first name as well as a surname according to IMDB, so Jackson Slate has that going for him. Jackson Slate and the nameless guys dive to the floor of the Blue Hole, a local sinkhole, and detonate C4, hoping to find gold treasure. Somehow, they are able to speak perfectly to each other despite having a breathing apparatus in their mouths; perhaps the film’s special effects budget went towards these magical devices.

Unfortunately for them, the charges awaken the CGI department, which begins animating a monstrous tyrannosaurus rex-type animal who quickly consumes the nameless poor souls but lets Jackson Slate float to the top. This is unfortunate for the boat driver because, despite his excellent marksmanship, he somehow manages to miss shooting the giant monster pursuing him, as though he were shooting at an imaginary target.

Alas, you did not get him, boat driver guy, presumably because you’re aiming your rifle into the air. This could have been avoided had the director told you where the CGI would be, so you can blame your subsequent death (spoiler!) on him.

The film then cuts to a credit scene playing a tropical-sounding tune that was apparently the only music within the production department’s budget, because it appears at least two more times in the film. It is here that we meet Sarah (Anne McDaniels, whom you may have seen in the award-winning Attack of the 50ft Cheerleader), a marine biologist who apparently likes drawing jellyfish. I did not know a whole lot about Anne’s previous work, so I checked her bio on IMDB, which reads, in part, “A casting director in LA once told her that she ‘sounded too much like a producer, and not like an actress.’ Thus, when in LA keep it softer and go ahead and let it fly in New York!!” Let it fly indeed, Anne. I’m not even sure what that means, to be honest.

While she doodles, local guide Henry (Berne Velasquez) takes vacationing couple Rod (Steven Helmkamp) and Jane (Candace Nunes) out to the Blue Hole, an apt description if I’ve ever read one. It’s literally a blue hole. While they travel to the Hole, a journey expected to take about an hour, Henry instructs his colleague to play that tropical song again. Amazingly, when they arrive, it is still playing. Either the song lasts for over an hour or they only had one tape on board.

As they dive, they come across the floating body of Jackson Slate, whom they then bring back on board the boat. Heading back to the mainland, Henry calls Sarah over to Rod and Jane’s place, because obviously when you find someone who may have a concussion and could be suffering from the bends, you call a marine biologist. When Jackson Slate comes to, he divulges that he owes a local crime lord a great deal of money and was looking for gold treasure so he could maybe pay his debts. Convinced the treasure is in the Blue Hole, Sarah, Henry, and Rod agree to go with him, while Jane stays behind at the resort.

Meanwhile, the crime lord, Tariq (Gildon Roland), dispatches two of his men to hunt Jackson Slate down and kill him and his crew. This does not go over well for his two men, because then the mysterious lizard strikes, and their aim is only slightly better than the last guy’s.

WHERE ARE YOU SHOOTING

I couldn’t believe their aim was that bad, so I enhanced the scene using state-of-the-art science and traced the trajectory of their bullets. It’s apparently incredibly difficult to hit a 50ft tall swimming tyrannosaurus. 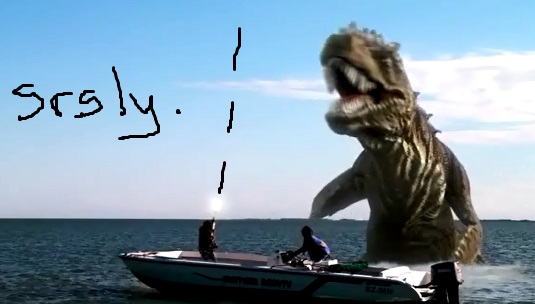 At this point, I seriously began to question whether or not any actual dinosaur experts were consulted. I want to say yes, but there was enough in the first 30 minutes that gave me pause. I like to imagine they hired one, but maybe just ignored him.

Dinosaur expert: So, I’m reviewing some of the footage, and I was just curious, did you intend for this thing to walk on water, or do you just suck at your job?

Dinosaur expert: The hell with this.

And no, that statement wasn’t hyperbole. This thing walks… 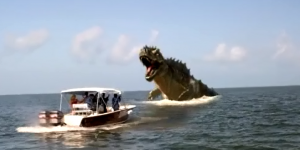