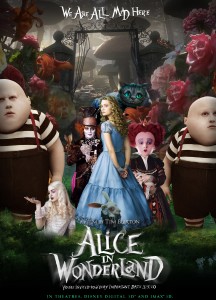 Tim Burton’s “Alice in Wonderland” has done it again. For the third straight week since it’s release, ‘Alice’ has managed to take the number one spot at the weekend box office.

Opening this week in theaters was “Diary of a Wimpy Kid,” coming in second place with $21.8 million. In an extremely close third place, “The Bounty Hunter” starring Gerard Butler and Jennifer Aniston brought in around $21 million during opening weekend. “Repo Men,” starring Jude Law and Forest Whitaker had a lack-luster release at just about $6.15 million.

Here are more of this weekend’s box office results –