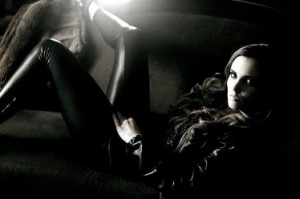 As I returned to work Friday afternoon after picking up my corporate lunch at McDonald’s, I opened my e-mail to find an album awaiting me from a young lady named Alexx Calise. I read over the e-mail to make sure it was from an actual person and not the usual shady spam mail on how to meet hot young single girls or Viagra via mail. Fortunately, this was the real deal.

I did a little bit of research on Alexx and was surprised that I’d actually heard some of her music, I just never realized who she was. She’s had several songs played on commercials as well as various television shows. She just released her second solo album, and I was fortunate enough to get a copy to review.

First, the obvious: Alexx can sing. Now, lots of people can sing reasonably well. But Alexx has been given a tremendous voice which she’s trained for a wide range of skills. She can express vulnerability in one song and angst and anger in another. When she puts full force behind her voice, she projects a refined power similar to Christina Aguilera.

The album seems to follow an emotional wavelength after a relationship, and in fact most of her lyrics seem to reflect a woman bent on independence. The first half of the album is more angsty, emotionally charged. The second half of the album still contains a lot of emotion, but by the end, it’s a little slower, as she seems to finally accept the inevitable and steadies herself for the future.

There are several highlights on the album, each with its own quirks. “Get Used to It” and “Good Enough” provide a harder edge to the album. “Cry” is one of the true high points on the album, showcasing Alexx’s voice in a much softer setting. The positioning of “Cry” was curious to me (third track), as usually the change of pace songs are towards the end of the album. The song is solid enough, however, that it doesn’t matter where it’s at. My personal favorite is “Break Me,” an aggressive track in which she asserts herself better than on any other track.

Perhaps the best quality of the entire album is the variance in sound. Few of the songs, if any, sound repetitive, which is appealing to me. I absolutely hate albums in which I feel like I could hear everything I need to hear in the first song. Alexx mixes her style and sonic quality enough in each song that you never really get that feeling. Above all, it seems like she truly had fun crafting each song.

There are really only two minor issues I have with the album. The first, as most of my exes seem to have with me, is its length. The album is only nine songs long, and most of the songs are pretty short, with only one song clocking in at over four minutes. Obviously, she probably chose the songs that she felt were strongest, but with over three years between the release of her first album and this one, I would have hoped for more.

Secondly, the instrumental arrangement behind her singing is just…meh. It’s not terrible by any means, and maybe it’s just a reflection of the music I usually listen to, but in terms of musicianship, as a listener and musician (I’ve played guitar and bass for eight years, piano for sixteen), I’ve come to expect riffs, solos, breakdowns, bridges…something different. For instance, one of my favorite bands, The Receiving End of Sirens, had three different guitarists and vocalists working at the same time, harmonizing. The layering of music really worked, and I think with Alexx’s talent, if the music were mixed up a little bit, it would go a long way. The music behind Alexx’s voice is fairly simplified, and I’d love to hear a little more in the next album.

I do, however, realize that this album is much more of a showcase for her voice than the instrumentalism, so what I’m saying is akin to going to a steakhouse and being critical of the vichyssoise when the main course deserves three stars from Michelin.

Wow, I’ve written a lot more than I intended. In summary, Alexx is truly a terrific singer to listen to and check out. Women will certainly sympathize with her lyrics and struggles. Although the album’s a little shorter than I’d like, don’t let that give you pause; Alexx is a talent to check out.

Now, if you’ll excuse me, I have a couple spam e-mails to reply to. Where’s my credit card…