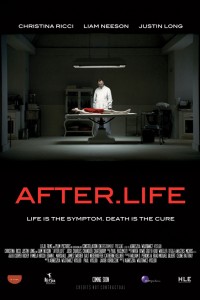 It seems that Justin Long is just repeating his role from Drag Me to Hell, but with a slightly different plot and cast.  Try watching the trailer for this film, and say that it doesn’t look almost identical to his role in that film last year?  Christina Ricci looks like she was born to play this role, she’s always had a bit of an look about her, and I could see her convincingly playing a dead girl. Add Liam Neeson in the mix and you pique my interest just enough that I won’t completely throw way a chance to see this movie.

After a horrific car accident, Anna (Christina Ricci) wakes up to find the local funeral director Eliot Deacon (Liam Neeson) preparing her body for her funeral. Confused, terrified and feeling still very much alive, Anna doesn’t believe she’s dead, despite the funeral director’s reassurances that she is merely in transition to the afterlife. Eliot convinces her he has the ability to communicate with the dead and is the only one who can help her. Trapped inside the funeral home, with nobody to turn to except Eliot, Anna is forced to face her deepest fears and accept her own death. But Anna’s grief—stricken boyfriend Paul (Justin Long) still can’t shake the nagging suspicion that Eliot isn’t what he appears to be. As the funeral nears, Paul gets closer to unlocking the disturbing truth, but it could be too late; Anna may have already begun to cross over the other side. With an unrelenting edge of menace, After.life is a stylish psychological thriller which provocatively questions the line between life and death.