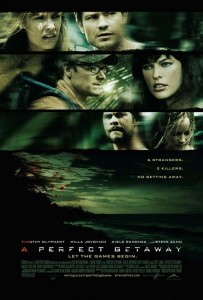 Beautiful scenery, set on the tropical islands of Hawaii. Luscious waterfalls, perfectly green grass for miles, fading into the blue ocean as the waves meet with the horizon. Sounds like “A Perfect Getaway” to me. But throw in a series of murders involving newlyweds on the island, and the honeymoon is over.

“A Perfect Getaway” is the story of Cliff (Steve Zahn) and Cidney (Milla Jovovich), a newly married couple that couldn’t appear more perfect for each other. Full of happiness and excitement for their tropical vacation, the two of them can’t wait to get to the beach and start their new adventure. But little do they know that they are going to get more adventure than they bargained for. Trouble starts when they run into two hitchhikers that are a little rough around the edges. After their awkward encounter, they finally arrive at the trail that will take them to the beach. But along the way they run into a group of girls who just got off of the phone with their parents, warning them of a murder that just took place where they are staying. Could the two hitchhikers that they ran into earlier be the ones responsible? The question now is whether or not they should stay.

Based on the fact that there would not be much of a movie if they did not stay, the two of them decide to push on. They figure, “it’s Hawaii,” and their honeymoon – what is the worst that can happen? Along their journey to the beach, they meet Nick (Timothy Olyphant), who is a self proclaimed “American Jedi.” Nick is the outdoors type, appearing much more natural in the environment than our two honeymooners. After getting pointed in the right direction from their new acquaintance, they find out that all of them are heading to the same beach. What a coincidence! So the three of them head through their beautiful surroundings to an amazing cove, where they all meet up with Nick’s girlfriend Gina (Kiele Sanchez), who makes quick friends with Cidney. So the couples decide to stick together for a bit, and head out their journey. 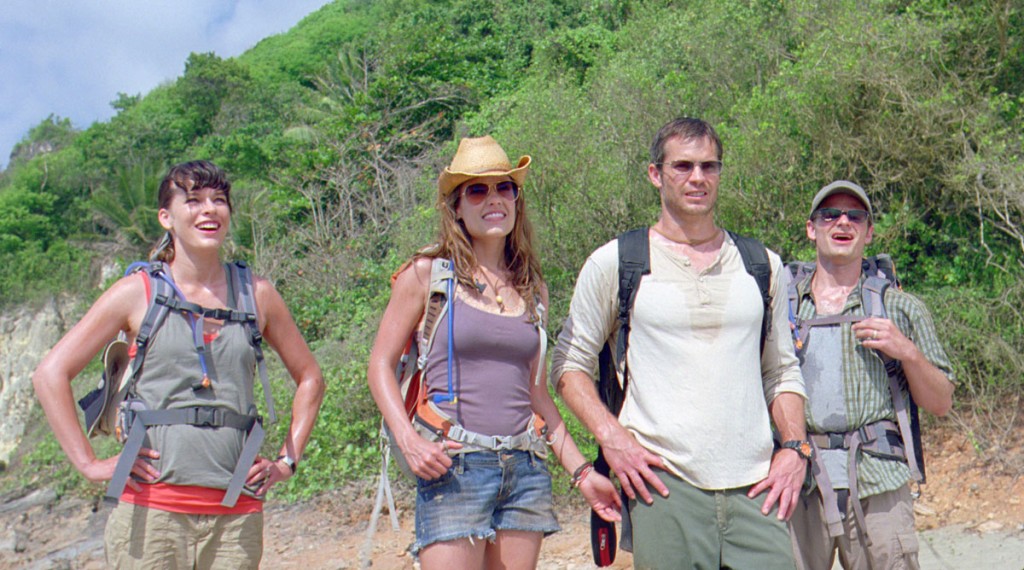 The movie is a constant guessing game, keeping you on the edge of your seat as you try to figure out who the murderers are on the island along with the main characters. The first part of the film starts off quite slow, looking like more of a National Geographic trip to Hawaii rather than a movie. The scenery and visuals are gorgeous, but the action takes a while to come into play. But once it starts, it keeps up pretty well and doesn’t really die down. There are plenty of scenes that will make you tense, and might even make you jump a bit. They did a good job of keeping my interest with the mystery and intrigue of the situation the characters are in.

All of the actors in the movie make fairly interesting characters, and they all do a great job in the film. Steve Zahn plays his usual character – quiet, kind of quirky and on the shy side. He always makes you want to laugh though, as he just has that kind of personality. Milla Jovavich fits into her role perfectly, and actually has a more natural feeling in this film than some of her action roles. I felt that she was very believable in her worried and alert character trekked carefully through the island. Kiele Sanchez plays a southern belle, who is not afraid to get her hands dirty. I think that she felt very natural playing Gina, and complimented her other half perfectly. Speaking of which, Timothy Olyphant steals the show in my opinion as her boyfriend, Nick. You can’t help but to like the guy, due to his charm and charisma on-screen. Olyphant has so much talent, and is a very versatile actor. His humor and outlook are enjoyable throughout.

Overall the film, while a little slow at times, is a fun experience. There are some things that are done very cleverly, that are not always expected. Other times there are some things that don’t make complete sense by the end of the movie. But just when you think that you have things figured out, you may want to think again. The fun in these kinds of movies is in not knowing exactly what is going to happen. The movie is not completely predictable, and will have even the biggest of movie buffs guessing. For that, the movie does have some much needed originality in a thriller genre that is not always so entertaining. The movie makes for a fun night out.

I give “The Perfect Getaway” a C+