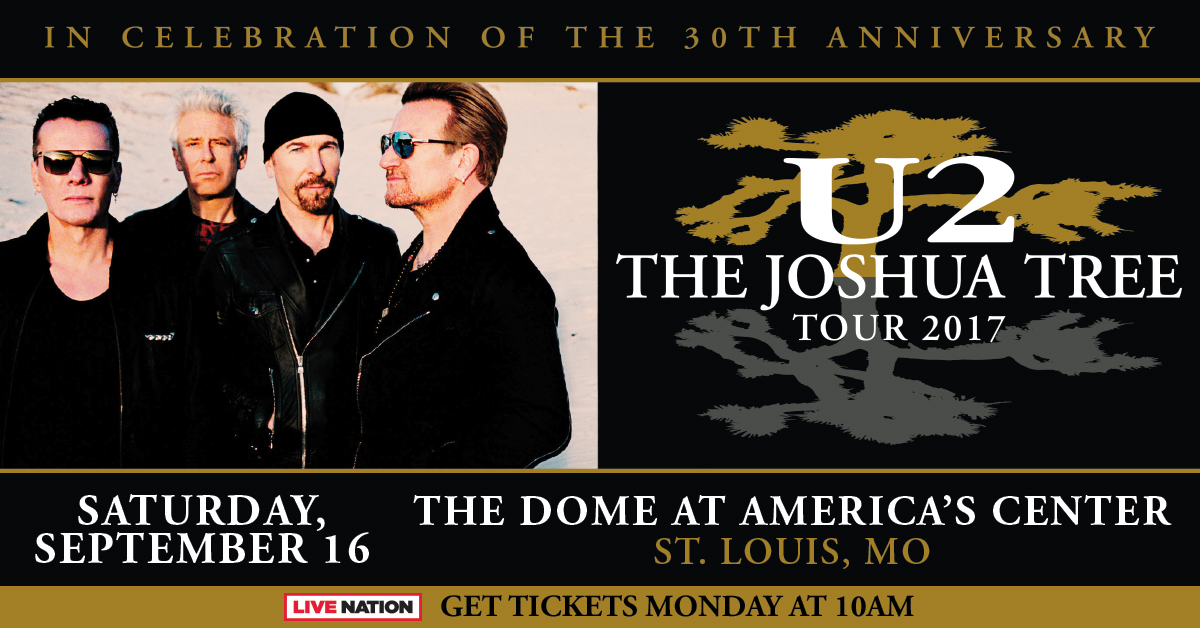 As St. Louis preps for U2’s first show in the city in over six years, here’s a look back at all the band’s stops in The ‘Lou.

Bono and the boys made their first appearance in St. Louis on April 7, 1981, playing at Graham Chapel at Washington University. This stop was a part of the Boy Tour.

The band returned to St. Louis, less than a year later, playing at Night Moves on February, 19, 1982. This stop was part of the October Tour.

It would be over five years until the band returned to St. Louis, but this stop was a memorable one. October 25, 1987, U2, unbelievably, played their only show at the St. Louis Arena. The band’s only appearance at the Checker Dome would be part of the Joshua Tree Tour.

Five years later, U2 would return to St. Louis, this time on the Zoo TV Tour. On September 20, 1992, the band played Busch Stadium. It wouldn’t be the last time the band played an outdoor stadium in St. Louis.

The PopMart Tour rolled into town on November 8, 1997, as U2 played the Trans World Dome. The Dome was just two years old at the time of the performance.

December 14, 2005, U2 played Savvis Center once again. This time, the band was in town for the Vertigo Tour.

When U2 plays the newly named, The Dome at America’s Center on Saturday, it will be the second stop at the dome for the band. This will mark U2’s ninth tour stop in St. Louis during the band’s history.

In eight previous stops, U2 has played the song close to 100 different songs. Which song was played the most? “I Will Follow” has been played seven times. Several U2 songs have been played six times including; “I Still Haven’t Found What I’m Looking For,” “Pride(In the Name of Love),” “Sunday Bloody Sunday,” and “Where The Streets Have No Name.”

Here’s another fact that U2 fans may or may not know. U2 has played songs from 17 albums in the eight previous stops in St. Louis. Which album has had the most songs played? The band has played 10 songs off the album Boy. U2 has played eight songs off the album Achtung Baby, Pop, and The Joshua Tree.
While U2 has played 8 songs off the Joshua Tree, that number will for sure rise, as the band will play the entire album on Saturday night. After seeing snippets of U2’s Kansas City show on Tuesday night, the band will surely throw in some other fan favorites and perhaps even a new song. One thing is for sure, just like the other eight stops, Saturday’s U2 performance undoubtedly be a memorable one.