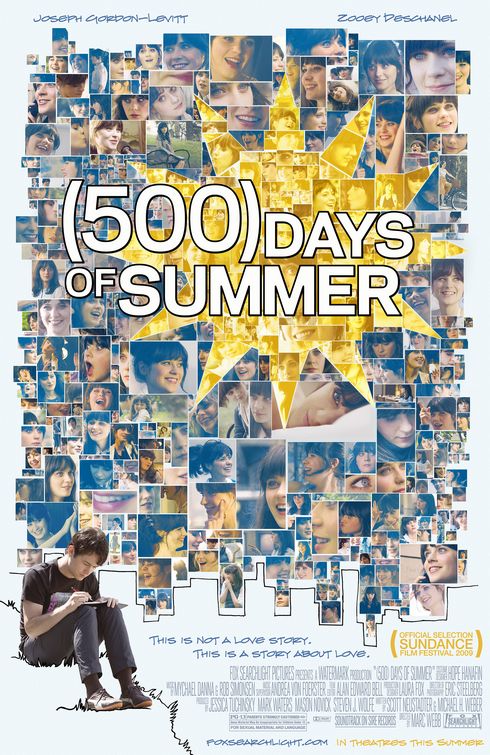 You know the story already, it has been done a million times before. Boy meets girl, boy falls in love with girl, etc. etc. etc. Only this time it follows those same beats, but it shakes them up and puts them in a different key to give us something new and original.

(500) Days of Summer follows Tom Hansen, a greeting card writer who really aspires to be an architect, as he meets the beautiful and captivating Summer Finn. The film details 500 of their days together (you don’t see all of them of course). In a non-linear sense you may see Day 1 and then switch right after to Day 223, it gives us a nice contrast to what people experience in relationships. The whole film follows their ups and downs as a “couple”. The relationship is a bit different than we are used to in romantic comedies.  The norm is usually the guy who is afraid of commitment and the girl who endlessly tries to prove that love does exist. However, in this film we do a complete 180. Tom is the character who is head over heels and has to convince Summer that love does exist, even though she believes it might be a fairy tale.

The best parts of this film are not in the story, once again we’ve seen this story in one way or another many times. It is in the execution that it is done so cleverly. Characters wear their hearts on their sleeves, and a lot of times their emotions are portrayed as how they see them. Realism is thrown out the door in many scenes, including one where people break out in dance to show one characters happiness. Another very clever scene is a side by side comparison of how Tom expectations for a night are, and how the night actually pans out. Despite these fun little segues the film is firmly rooted in real life relationship problems. You are going to find very few adults who haven’t experienced relationships just like this. Where at Day 1 you are so happy, but at day 223 those same things that made you happy might be the very things that annoy you.

The two leads in this film is what makes it work. Joseph Gordon-Levitt continues to prove he is a star, playing the Brit pop loving and slightly sappy Tom. I couldn’t help but identify with his character. His character comes from the same generation as me, and is left to believe that love is like it is portrayed in the movies. He switches brilliantly between fanciful fits of love, to glowering when he is down, to spewing almost hatred when he is spurned. He controls the lions share of the film, in fact I don’t believe there is a scene he isn’t in, and he gets the most out of his character. Zooey Deschanel might be one of the most captivating women in Hollywood. I don’t know if she is the most beautiful woman working in Hollywood right now, but she certainly has the most charisma. Due to her screen presence you immediately get why Tom would be so over the top about Summer. Her nuanced performance is great, from early on you can tell things aren’t exactly as Tom sees them as she throws in little quirks to her performance.

Kudos go to new feature director Marc Webb and screenwriters Scott Nuestadter and Michael H. Weber for crafting such a unique story in such a stale genre.  On paper the synopsis to this film looks like so many others seen before it, but the ingenuity shown by the writers and directors make it something unique that takes us through a full range of emotions. The film is funny and engaging largely due to the script, and even more so for the unique camera work. One can only hope that Marc Webb isn’t stuck to doing music videos anymore.

In the end, this is not a love story. You are told that from the beginning of the film, but that is one of the things that makes it unique. If you don’t mind a little quirkiness then this might be the perfect date movie for you to end the summer. There are no doubt going to be some people who don’t like this movie because of the way it jumps around or because of the way it tells the story. If you enjoy new takes on comforting old genres then this is for you.

Another Take From Zac:
Mark Webb delivers another unconventional and excellent rom-com for the calendar year, filing his film with originality, style, plenty of laughs, and a pair of great performances from his boy and girl leads.
The film on the surface is your classic boy meets girl story, but our narrator warns us early on that this is not a love story. With that said though, you can’t help but get swept up in the love tale being told on the screen as we watch Tom and Summer court each other. The funny thing is the film opens with the day right after their break up and Tom having to be talked off a ledge, figuratively, by his little sister over the loss. We are then thrown into the couple’s back story from Day 1 when they met up ending with the 500th day of their intertwined lives.
The film is filled with quirk, coolness, and style. Both of our leads are smart and hip people, but are in no way pretentious at the same time and Mark Webb and company do a fantastic job of creating something that feels real and genuine, even amongst some fantastical moments. Tom’s thought process is genuine and too rarely seen in films these days for a guy’s perspective. Insecure at times and a bit shy and awkward he is easy to identify with and his trials and tribulations are something we can all connect with. Summer on the other hand is written as the perfect type of girlfriend type but not the kind of girlfriend Hollywood tries to force down our throats. She is real and beautiful and fun and we can easily see why Tom falls head over heals for her.
The film itself has a number of cool moments are clever bits thrown in and while some might not be wholly original, it feels fresh and is done with such a high quality they work extremely well. Webb implements split screen on a number of occasions to great effect, and once to amazing effect when we get to see the expectations vs. reality scene that really elevates the film to top notch work. The film is also laced with sly film, music, and geek references that are never waving their hands for attention but provide great laughs if you catch or get them.
The film also got the balls to not succumb to stereotypes, clichés, or convention in the rom-com format and is another breath of fresh air for the genre this year. Stories about relationships have had some real winners this year and this as a double bill with Away We Go would be a fantastic display of how to do romantic comedy. I will say, the film contradicts itself a little bit with the whole grand conception of love, fate, and whether it exist or not, but it’s ok because I think most people kind of go all over the place with their feelings on this topic depending on where they are at in their life romantically. But with that, there isn’t a moment in the film that doesn’t feel honest and you can’t say that about too many movies nowadays.
The actors in the film are also quite good to great and that really helps elevate the film to the level it achieves. Joseph Gordon-Levitt plays Tom and he continues to shine as one of the best young actors working today. He makes Tom real and genuine making a strong character even through all his faults and weaknesses. Levitt also brings the funny with ease and has excellent chemistry with his co-star Zooey Deschanel. Deschanel always plays a great girlfriend in movies and she does so again her as the free spirit Summer. The way she works through life might be frustrating for some and relatable to others, but she will suck both mindsets in as she acts all cute on screen. Deschanel is a bit type cast here in that we have seen variations on this character before, but she is the most sound and real and less aloof then in past turns and it is one of her finest turns yet.
In the end, 500 Days of Summer is a winner on just about every level. The film will have you smiling, laughing, and tug at your heart with the brutal truths of love. The films structure that jumps forward and back through out the course of their relationship works very well to keep us on our toes as we try and figure out how this is going to all play out. One minute they are a happy couple then the next Tom is bashing summer or is a hopeless wreck, but the film still suckers you into rooting for these guys in the end and you will have to check out the film to see whether it works out or not.
500 Days of Summer is an A