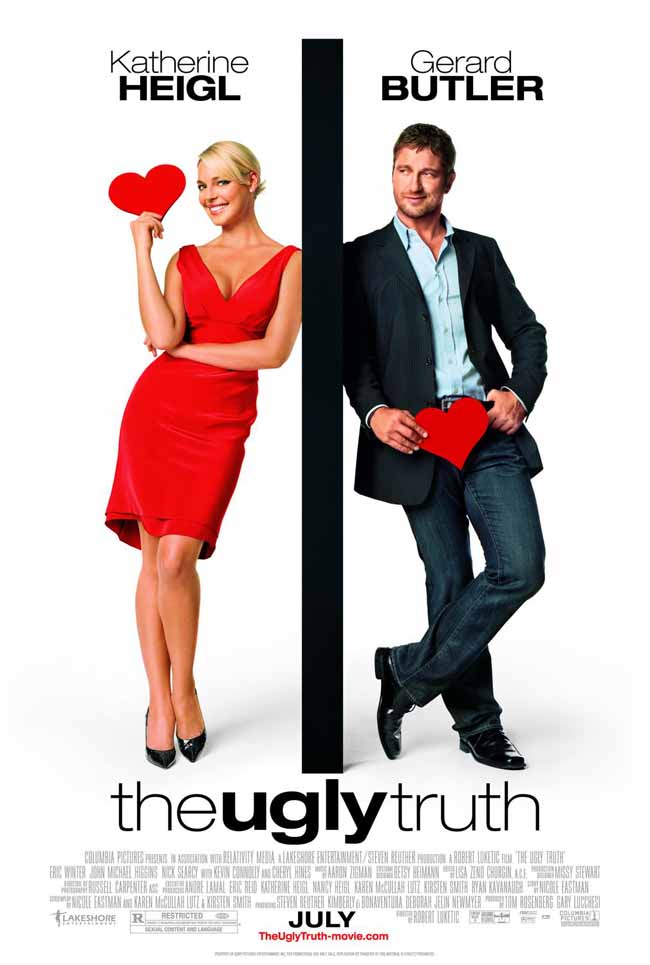 The ugly truth about The Ugly Truth is that it just isn’t a good movie. It is your standard romantic comedy, and even worse it tries to be something it is not.

The Ugly Truth follows a stuck in a rut morning show producer for a local network affiliate in Sacramento, Abby Richter.  You see Abby is a control freak in every way, which seemingly makes her a great producer, but doesn’t help her in her love life. Despite the fact that she is supposed to be this great producer, ratings are far down and she is getting the lowest share in town, even worse than public access channels. Enter Mike Chadway, a chauvinist who tells women ‘The Ugly Truth’, that all men are pigs and only care about looks and not your interests. Chadway has a show that is doing good business on public access, so he is brought on to improve the ratings despite the protest from Abby. Mike and Abby enter into a bet, if she follows his instructions and gets the guy of her dreams, she has to work with him. If this doesn’t work, he will quit the show. From there you can pretty much guess what happens, because it is pretty much the same as any other romantic comedy you have seen.

Now, don’t get me wrong. I’m not against the romantic comedy genre. In fact, when done right I think it is very entertaining, even if it tends to be a bit formulaic. The problem with this film is not the formula, it is the execution. The humor is filthy and potty mouthed, which works in comedies like Knocked Up (which also starred Katherine Heigl). The dirty humor seems very forced and unnatural throughout the whole film. The entire time I almost expected the actors to wink at the camera and tell me just how edgy they were being. Butler and especially Heigl don’t fit the bill for the foul mouthed characters they play in this film. It might seem hypocritical of me at first glance, but once you see the film you might get the same feeling as I do. Sometimes that humor works, but this type of romantic comedy it just feels blatantly out of place.

Chemistry between the two leads is there, but the story they are given doesn’t do them any favors. From the beginning you can see they have an attraction, but the script makes it overly obvious which way the story is heading. Cue longing looks after their first meeting, lingering stares and every other cliche in the book and you have The Ugly Truth. Sometimes, their passion pays off, but the rest of the time is stiff enough to make us question anyone would like either of these two characters. Katherine Heigl has publicly stated how she felt Knocked Up was misogynistic, and then goes and picks up a role in this film that treats women ten times worse than the previously mentioned film. She does herself no favors by acting in a film this sexist and demeaning. Gerard Butler continues his romantic comedy outing. I can’t help but think he needs to stick to roles where they let him keep his accent. His American accent seems very unnatural and a bit forced. Although, out of the two leads he is for sure the more entertaining, but it still isn’t saying much.

If you like standard romantic comedies that are by the numbers, and you don’t mind a script that is juvenile, then you might like this film. There were plenty of people in the screening I went to who enjoyed it. It just didn’t flow for me unfortunately. There are funny moments here and there, but it might be something I’d wait to come to DVD. Maybe even wait til it comes out on movie channels, but don’t waste the price of admission when there are much better films out right now to see.

The Ugly Truth gets a D.