30 Movies Featuring the Workplace, In Honor of Labor Day Weekend 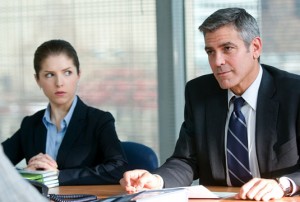 This week is pretty light on new releases. So instead of basing a list around another film that’s open (as is are usual ritual) we are instead building a list for the holiday – Labor Day. And, as it turns out, we cast a pretty wide net.

As Tom & Dan (not be confused with Jan & Dean) began their brainstorming session it quickly became apparent that there are way, way, waaaaaay more than the usual six movies that compose a list around this place. So they just kept writing….and writing.

So here’s your list…your mega-list – 30 Movies featuring the Workplace.

Wait? 30? Seriously? The only way you’re going to find out is by clicking.

Shot largely in St. Louis Up in the Air is, given our current economic climate, an appropriate way to start our list. Ryan Bingham (George Clooney) fires people. It’s his job. He’s not a CEO nor does he work in Human Resources. He is a hired gun brought in to facilitate a business’ bloodletting. He handles the dirty work “the suits” don’t have the stomach for. As such, he exists in a world of perpetual travel. Constantly moving from town-to-town; delivering bad news like some sort of funhouse mirror Santa Claus. Checking in. Checking out. Amassing frequent flyer miles and memberships in customer loyalty programs. He exudes charm and detachment…he is, after all, George Clooney. Make no mistake; Bingham enjoys his life; the corporate uniformity of airports and hotels and the status his incessant travel affords him. And, believe it or not, he enjoys his job. While the idea of interminably terminating might not sound palatable, it is work for which he is well-suited. Years of on-the-job-training have turned him into an efficient officiant of the ceremony of ritualistic downsizing. He’s not callous, mind you, but his natural state of detachment serves him well.

Bingham is a role tailor-made for Clooney. His character is something of a contradiction-in-terms – cutthroat yet compassionate, callous yet caring, matter-of-fact yet charming. Many actors today could have played one (or even some) these traits but only Clooney could juggle them all.

Up in the Air is the rarest of all things: a mainstream Hollywood film for grown-ups. It is by turns melancholy and light-hearted; contemplative and whimsical; cynical and, despite being a tale of the economic downturn, hopeful. And, if that’s not enough, it’s a romantic-comedy where a middle-aged man falls for *gulp* a woman (Vera Farmiga) his own age. – TOK

Sam Rockwell plays Sam Bell, an astronaut manning a moon station with only the aid of GERTY (voiced by Kevin Spacey), a robot that controls his environment and attends to his needs. The purpose of the moon station is to mine a newly discovered fuel source and send it back to Earth. Sam is nearing the end of a three-year mission and anxiously awaiting his return trip home when, during a routine drive on the moon’s surface, he wrecks his vehicle and is knocked unconscious. Upon awaking he discovers another version of himself diligently at work. At first the two practice a unique game of cognitive dissonance; each trying to go about their daily life with minimal interaction. Even GERTY is no help as he treats both as if they belong, though clearly one must be an interloper.

Moon represents a rarity in today’s world: a smart science fiction movie. Rockwell is riveting as both versions of Sam Bell, one cocky and fresh; ready to take on his new mission. The other: weary and haggard; desperately wanting to go home and unable to decipher his current identity crisis. His performance(s) highlight subtle differences. He conveys the two characters through shifts in posture, gestures and varying degrees of energy. Rockwell’s performance is so enthralling that we don’t get caught-up trying to figure out how the trick was done.

Disarming the audience by couching controversial present-day moral dilemmas behind a cloak of sci-fi was a device that served Twilight Zone well, and it continues to work here. While the film might lack the jaw dropping final twist of its most memorable episodes, it uses the genre as an artifice to circumvent the knee-jerk reactions viewers might have if they were presented in a more traditional manner. – TOK

When “Office Space” was released in 1999, it landed with a thud, making less than its $10mm budget in its opening weekend. Admittedly, the film was poorly marketed but something wonderful happened: home video. By sheer word of mouth, Mike Judge‘s sly jab on staying afloat in the corporate pool became a verifiable cult classic, instantly forming a bond between anyone lost in a sea of cubicles who could perform an “O-face”, display their flair or appreciate the significance of the red Swingline stapler. – DG