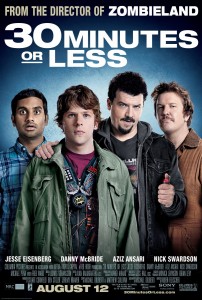 Nick is a small town pizza delivery guy whose mundane life collides with the big plans of two wanna-be criminal masterminds. The volatile duo kidnaps Nick and forces him to rob a bank. With mere hours to pull off the impossible task, Nick enlists the help of his ex-best friend, Chet. As the clock ticks, the two must deal with the police, hired assassins, flamethrowers, and their own tumultuous relationship.

In order to enter the contest, become a fan of ReviewSTL on Facebook and share ReviewSTL.com with all your friends (click the “share” link on the bottom-left side of the page). Then leave a comment under the contest post, telling us what your favorite Jesse Eisenberg movie is and why! Then like the post to complete your entry. NO PURCHASE NECESSARY. PLEASE REMEMBER TO READ THE RULES!

Watch the trailer below:
[hdplay id=395]