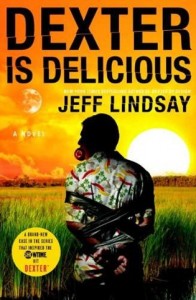 I am a huge fan of Showtime’s “Dexter”. So, when I found out it was based on a set of novels by Jeff Lindsay, I had to read them all. I picked up the first one, Darkly Dreaming Dexter, last summer and am finally all caught up. Dexter is Delicious is the most recent installment of this series.

For those of you not familiar with the television show or the novels, Dexter works for the Miami Metro Police Force as a blood pattern analyst. He is married and has two step children. His sister, Deborah, also works for Miami Metro as a detective. On the outside, Dexter looks like a normal human being. However, on the inside, he is guided by a “dark passenger” that has the urge to kill. He doesn’t kill just anyone though. He searches for the low of the low, bad guys who get away with doing bad things, and he makes sure to get justice.

If you have not read any of the other books, you may not want to continue with this review. The plots in the books differ from the television show. Most of the characters are still the same, but there are some pretty big differences. And I don’t want you to continue on if you are not aware of these changes.

The plot of Dexter is Delicious continues nine months after the last novel, Dexter by Design, with the birth of his daughter, Lily Anne.  After Lily Anne’s birth, Dexter decides he wants to change and become a better man for her. This means no more killings, which his “dark passenger” does not enjoy at all. Throughout the whole book, we see Dexter struggling to be good and ignore the thoughts he is used to.

It doesn’t help that Deborah drags Dexter into multiple kidnappings and murders. It seems as though someone is cooking and eating people, while they are alive.  The investigation leads the Morgans to a group of people who believe they are vampires (some even have the sharp fangs to prove it.) Dexter finds himself repeatedly thrown into dangerous situations, which are outside of the duties of a blood pattern analyst.

This novel is mostly exciting and keeps you on the edge of your seat. However, I don’t like Dutiful Dexter…always doing what everyone else wants him to do. Or Harmless Dexter…ignoring his dark thoughts in order to be a better person. I think Dark Dexter is needed in Miami, especially since it seems so many criminals keep getting away with horrendous crimes.

This book is full of good twists and interesting characters. It also brings back a few people we thought we wouldn’t see again (or, in my opinion, hoped to never see again.) Just when you think Lindsay couldn’t do anything else to surprise you or make you gag, he pulls out something unbelievable. I cannot wait for the next book, Double Dexter, coming out October 2011.

Dexter is Delicious gets an A.