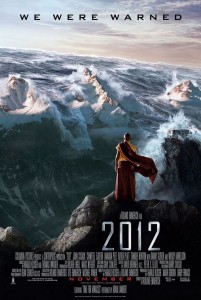 Roland Emmerich’s latest is a good fun premise and starts off as an entertaining little disaster movie quickly dives into head scratching plot holes and absurdity that doesn’t make sense at any turn.

(Spoilers throughout, sorry they must be discussed)

The plot of the film revolves around the supposed end of the world predicted in the Mayan calendar with the end coming Dec 21st, 2012.  The discovery of the impending changes is discovered three years early when some geological studies discover rising core temperatures and changing crust density that will lead to cataclysmic destruction and displacement of the land masses of the earth.  The United States from here spear heads a massive project to build a set of arcs to help preserve the life and society of earth during the mass destruction.  As the impending destruction arrives, the initial destruction of LA that we experience through John Cusack’s family characters eyes is indeed an impressive cinematic moment but after this and the explosion of Yellowstone the film drops off in quite a hurry.

The first problem is the Russian family that is inserted into the plot are completely unlikable and a waste of time.  From here, how many times can we really see an airplane take off in destruction and narrowly make it?  Once Cusack joins up with the Russians, his story become pretty worthless, and unfortunately they stay away from Chiwetel Ejiofor’s scientist with a conscious plot which is far more interesting, well until we get to the ludicrous final scenes.  From here let me bullet point some thoughts that crossed my mind:

-it turns out that one of the four completed arcs encountered some roof damage so they decide to not put anyone on board since there chances of survival are so much better sitting in the side of a mountain that will flood rather than on a huge boat that has a damaged ceiling, right

-the president of the U.S. decides to go down with the ship as they say and none of the other top officials make it back to assume the presidency, so Oliver Platt who is a high ranking official takes over, almost coup like, and bosses around the leaders of all the other nations involved.  The president dies and we are supposed to believe that all the much higher ranked officials from around the world are going to do everything they say.

-homage or ripping off take you pick, but there are a number of references that seem like they are only in there to convey some established emotion in us.  The Princess Diana tunnel, which you can figure out before they tell you, the endless Titanic references, and even an shot of a collision that mirrors the iceberg cutting the ship, and this is to only name a few

-our heroes are to believe Hawaii is going to be a land able destination? Islands are VOLCANO’S!! I think they are going to be messed up?

-Or how bout the fact that all the finale’s tension hinges on the fact that everyone will die if they run into the side of Mount Everest as they slowly drift across a new lake formed bellow the summit.  This after they have already bashed into other ships and mountains at a much greater velocity, but their slow crawl is going to end them.

-Also, how did they get to Everest so fast?

-Also, why would you ship be unable to turn on its engine because an f’ing door is open!!!

-Let’s seal off the door ways so the water can’t get through, even though the ceiling is grated and will over flow.

-Also, how does the middle compartment flood and drowned people, but the compartment connected to where the water is pouring in not?

-You’ve seen all the best bits already in the trailer

-Tzunami’s that go so high and far inland they submerge the Himalayas? What!

-Woody Harrelson is the best thing in this movie, which is a good thing

I could go on and on, but hopefully this is enough to dissuade you from seeing the mess.  Yes the effects are top notch and impressive, but if the story and heart aren’t there what does it matter.  Now, I wasn’t going into this flick expecting it to be a expert piece of filmmaking, I was expecting dumb fun, and while the first third of the film might be fun, the rest of the film is just dumb.  Also at two and a half hours the film is way, way, to long.  And I won’t really spoil the certain fates of characters and more intimate moments of the finale, you can’t possibly watch it without being embarrassed at the filmmaker’s perception of your intellect to find this plausible or interesting.

In the end, 2012 could have been a fun film with an interesting premise but becomes a dumb down action film that makes zero sense whatsoever.  Anyone with a the ability to think will be scratching their head at this one way more than they should and the filmmakers insult us for thinking we wouldn’t notice.  Dumb fun flicks can be a blast, but there has to be more to the film then big effects and beyond belief events.  Cusak and Ejiofor both do a decent job in this mess, but they can’t come close to saving this train wreck.