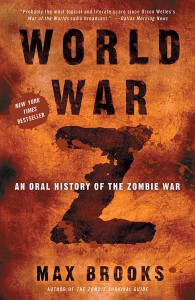 This is what Comic Con is all about! Releasing big news on genre projects, and this year is already starting to deliver. MTV sat down with “World War Z” author Max Brooks and received the scoop that Paramount is moving forward with their World War Z film project, and the film now has Brad Pitt as its star. Brooks also let slip that Paramount has optioned both “The Zombie Survival Guide” and “The Zombie Survival Guide: Recorded Attacks” graphic novel which were written by Brooks.

Brad Pitt as the lead role is exciting, but at the same time not that surprising as Pitt’s production company Plan B secured the rights to the novel in 2007.  The screenplay was written by J. Michael Straczynski, but later rewrites were done by Matthew Michael Carnahan.

Brooks told MTV that Parmount is aiming for a 2012 release for the film, which tells the stories of survivors of the Zombie Apocolypse or “World War Z”.

Many people don’t realize this but Brooks is the son of film legends Mel Brooks and Anne Bancroft. If that isn’t some good breeding, than I don’t know what is! Anyone who has read “World War Z” can attest that Brooks has talent, and it is different than the talent of his father. I’m excited to see if he can make a career as great as his father’s.

My one hope in this film is that they present it like a mockmentary, much like the audiobook.