Bear with me, it’s almost over.

^ Words that have haunted me all my life.

Spring training is winding down, and as the Cardinals begin their preparations to move back north, it would appear that most of the roster decisions have been made. This includes the starting rotation, which had only one real choice to be made. Yesterday, I reviewed the first half of the starting rotation, and now I’m here to finish the job, because as I tell my women, I’m not satisfied until you’re satisfied. But hopefully this turns out better than those scenarios, in which I normally pass out and wake up to an empty bottle. 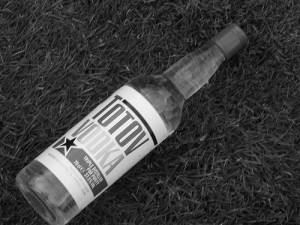 Lohse is both a lucky and unlucky man. He suffered through a couple of injuries last year which prevented him from being as effective as he was in 2008.

He was, however, lucky enough to have a career year after signing a one-year free agent deal. He along with his agent, Scott Boras, who feasts on the souls of the innocent, turned that into a four-year deal with the Cardinals. Whether this was a prudent decision on the Cardinals part has yet to be seen, as Lohse is being paid $10 million a year to essentially be a number three or four starter.

The winner of the most-confusingly-spelled-last-name, Lohse is a solid pitcher who relies on location and movement more than pure ability. If he can stay healthy, count on 12-13 wins from him. He won’t overwhelm anyone, but he could do just enough to keep the Cardinals at the top of the hill.

Garcia is in the process of coming back from Tommy John surgery (ligament replacement in the elbow), so he didn’t pitch the majority of the year last year. He has in the past been considered a top-of-the-rotation starter, and he did well enough in spring training this year to merit a chance in the rotation. Questions remain whether or not he can stay healthy, especially since he hasn’t thrown more than 106 innings in a season since 2005, but he is an intriguing talent.

The most likely course of action is to bring Jaime along slowly, giving him maybe 20-22 starts this year. There is a large amount of evidence that speaks against dramatically increasing a pitcher’s workload from one year to the next (25-30 innings is typically the cap), and Tony LaRussa will no doubt heed this.

The man Garcia beat out for the other spot in the rotation, Kyle McClellan, will remain on the team as a long reliever and spot starter. McClellan is a St. Louis native and a fantastic beverage cooler driver. 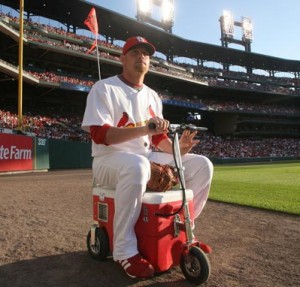 He will also be the backup plan should Garcia wear down or re-injure himself.

Rich Hill was the third candidate for the rotation spot, but an inconsistent spring earned him a beatdown from the Dave Duncan Pain Train and a ticket down to Memphis.

In the rest of the minors, there really only seems to be one super bright prospect, Shelby Miller. He did pretty well in camp this year, showing off an impressive fastball. He’s starting in AA this year, but don’t be surprised to possibly see him in September.

Tomorrow wraps up the Cardinals preview for this season. After this week, I’ll most likely be going to an every-other day schedule. As always, send comments/suggestions for future posts.