If I’m Cardinals manager Tony LaRussa, I know the first three men I’d trust to hand my balls to.

The first is the equipment manager who rubs them in mud and ensures a good grip on the balls is attainable.

The second and third would be two gentlemen named Chris Carpenter and Adam Wainwright.

The latter two are expected to lead a rotation that is as deep as nearly any rotation in the National League, much to the delight of Cardinals nation and, of no less importance, their wives. Although the fifth rotation spot isn’t “officially” determined as of today, it’s pretty obvious who won the battle for it. I’m going to split this preview up and talk about the first three starters in this post, and the last two/long relief in the next post, as I am unwilling to handle more than three or four guys at a time, unlike my ex.

2009 NL Comeback Player of the Year

Born in Florida in 1965, Cris Carpenter was drafted by the Cardinals in the first round of the 1987 draft. Now 44, he spends his time teaching and perfecting his o-face to be printed on Donruss baseball cards. 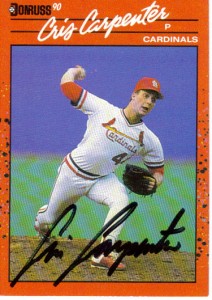 But this entry isn’t about him. This is about Chris Carpenter, the man who was robbed of a second Cy Young award last year.

When healthy, Carpy’s one of the top pitchers in the league. Claimed off the scrapheap in Toronto, Dave Duncan turned Carpenter into a fire-breathing, lineup-eating, jockstrap-breaking monster. 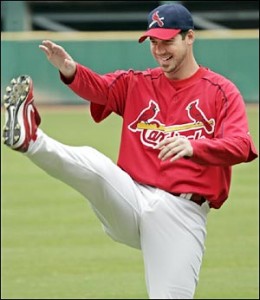 His absence was noticeable in 2004, when he was forced to miss the last part of the regular season and playoffs due to a forearm injury. In 2006, he atoned, pitching 8 shutout innings in Game 3 of the World Series.

He missed the majority of 2007-2008 with injuries, but 2009 was a true return to form. If he can keep healthy, he’ll anchor a solid rotation and be a good mentor. Carpenter throws five different pitches: a two- and four-seam fastball, a circle change, a cutter, and a 12-6 curveball.

Wainwright, too, rebounded from a 2008 injury to dominate the NL last year. He finished third in the Cy Young race behind Tim “Toke ’em” Lincecum and Carpenter.

Wainwright possesses an above-average fastball and one of the most devastating 12-6 curveballs in the game. Don’t believe me? Ask Carlos Beltran. Wainwright’s already earned his spot in Cardinals history with his amazing run through the ’06 playoffs as a reliever, ending the NLCS and World Series with strikeouts. Still only 28, he’s got a tremendous future as a Cardinal ahead.

Perhaps the next Dave Duncan Reclamation Project, Penny struggled in Boston before he returned to the NL last year. Penny signed a one-year contract with the Cardinals over the offseason.

The Bearded Clam, as nobody calls him, is a two-time All Star and once finished third in the Cy Young race, giving him legitimate credentials as a solid pitcher.

That’s all for now. It’s a beautiful day out. Go outside and BBQ, and call me so I can come over.