Zac has already detailed for us how this year is going so far. So, how is it going to end? Do we still have a lot to look forward to? Of course, although there are bound to be some disappointments, although plenty of surprises as well. It’s a little past halfway in the year, but I will give you an overview of things to come! Keep in mind this is just an overview, if I leave out something you are looking forward to, I’m sorry. These are the movies I think are most likely to succeed or just flat out bomb. 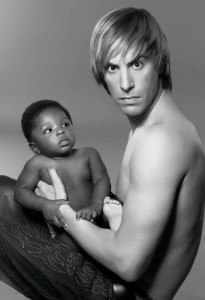 Sacha Baron Cohen’s followup to the widely popular Borat follows his persona of an Austrian gay fashionista talk show host who is blacklisted from the fashion world. If you weren’t a fan of Borat Cohen is probably not going to convert you with his followup. Expect over the top flamboyancy and offensive jokes. Also expect it to be uproariously funny in a lot of those same parts. Borat was a breakout hit, this film however has a lot more riding on it.

What could go wrong? There no doubt came a little Borat backlash after awhile. People can only take so much of a funny character’s catchphrases said by every drunk frat boy before a little backlash happens. A lot of the very same crowd Cohen was lampooning seemed to latch onto the hysterics not quite realizing that he was in essence making fun of our very society. Bruno is going to push that envelope even farther with his gay persona. In a post Prop 8 world where gay marriage is a hot topic it will be interesting to see who latches on to it. As stupid as his characters are, they make the people around him look even more stupid. 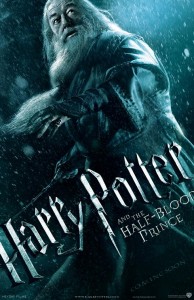 The penultimate book in the Potter series is finally here. After a delay of almost 8 months fans who were rabidly waiting for it in November finally get to see much of what they are waiting for. Half-Blood Prince is one of the best reviewed books in the whole series. It contains a surprising array of emotions for all the characters to feel. You will experience a lot of love and a lot of tragedy in this one. While this brings the series back to PG don’t expect a light ride. The Potter series has a lot of twists and turns that will make you feel a bit sad and lost by the end. What will make you even more sad? The ending of this one will make the wait for Harry Potter and the Deathly Hallows even more excruciating.

What could go wrong? Will there be a backlash for moving this film to a new release date at the last second last year? Probably not, Harry Potter contains one of the most rabid fanbases out of popular fandom out at the moment.  WB no doubt took this into account when considering the move. If anything they made the movie much more anticipated and more likely to have a stellar opening week. It will be interesting to see if it can beat Transformers amazing opening week. If midnight ticket sales are any gauge on how well it could do, this could be the most successful film to date. David Yates and team have a lot of work to do to make sure this ramps up the excitement for the final showdown in the series, which has now been broken into two parts. 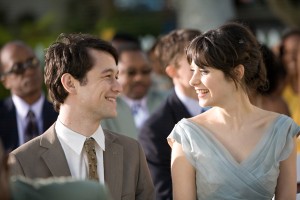 The charming little indie romantic comedies are coming out left and right ever since hits like Garden State and Juno. We’ve already seen one great addition to the genre with this summer’s Away We Go. Now comes yet another endearing comedy marketed in the same vein as the aforementioned films. This is a film that gives us a very fresh look on love and romance. It jumps around from the first days of love where nothing could be wrong, to the end where everything is going wrong. By cleverly positioning these views side by side you get an entirely new take on the modern love story, if you can call it that.

What could go wrong? Well, as great as I and other critics thought Away We Go was, it has not translated into a wide release and major money. This is another film that might end up the same way, with lots of critical praise, but almost no audience. It’s a real shame to see a film like this and others like it not succeed when other films get wide releases that don’t compare favorably at all. Both of the leads in this film are up and comers, but still aren’t big enough to put up on a marquee. The affability that both of them have could translate into a very successful outing for Fox Searchlight. It will be interesting to see. 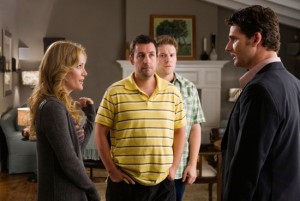 Ahh, the current kings of comedy are back at it again. Judd Apatow reunites a lot of his crew once again, this time set around an already established star, Adam Sandler. Add in a cast of people who he made famous, as well as Jason Schwartzman and Eric Bana. I’m sold!  The trailer for this film is great, even though it does seem to reveal a little bit too much of the plot. It will be nice to see Sandler play a role where he won’t have to be over the top, but still get laughs. You also have to keep in mind that Seth Rogen is a much bigger star than he was when he starred in Apatow’s Knocked Up.

What could go wrong? Really, the only thing potentially holding this back is the movie itself. It previews to horrible reviews it still will have a decent first weekend, but word of mouth is really powerful on films like this. 40 Year Old Virgin and Knocked Up, Apatow’s two previous directing efforts, did so well due to word of mouth. Add in a great marketing campaign and this movie has the potential to out gross Apatow’s other films. What also helps is that the last part of July is a little emptier than usual due to some of the lasting effects of the writer’s strike. Only time will tell, but I see a respectable gross in the future for this film. 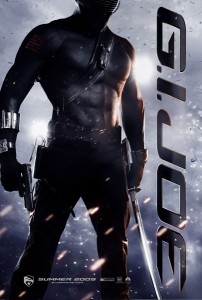 With the success of the Transformers film, there was a rush to get other Hasbro properties made. Why not go with their biggest toy line? G.I. Joe? It contains all the right stuff for a blockbuster. Insane weaponry? Check. Bad-ass men and women in uniform? Check. Mysterious bad guy? Check. Potential for over the top action sequences? Check. All this sounds great on paper, so….

What could go wrong? Just about everything it seems. This is one of the films that was rushed into production because of the writer’s strike. As well all know, when you rush things, you get sloppy. The trailer for this one looks absolutely ridiculous, and not in a good way. Then add in the rumors that test screening audiences gave it some of the worst reviews ever for a film in the past five years and you have a recipe for disaster. Of course, studio Paramount Pictures states that these are all rumors and they are pleased with the film. The problem is we don’t know if this is a PR cover up or if the film has just gotten unlucky in the press. I’m ready to see it and change my mind. I don’t think it is going to judging from trailers and clips for the film. 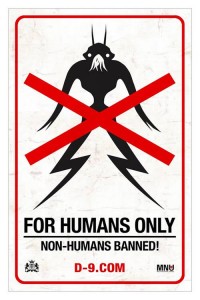 An feature length adaptation of his film short Alive in Joburg, Neil Blomenkamp brings us a documentary style film about aliens who are kept in refugee camps in South Africa. The concept is very good, and with the small budget the effects look very well done. It looks like a great innovative take on the sci-fi/alien genre. Peter Jackson who hasn’t done a lot since finishing the Lord of the Rings trilogy is on here as a producer. Originally he was set to produce a Halo movie with Blomenkamp, but unfortunately the deal fell through.

What could go wrong? Well, not the marketing.  They have one of the coolest viral marketing campaigns going on right now. In fact, after a screening the other day I was walking out and noticed a sign by the bathrooms that said “Humans Only” with a drawing of the aliens from District 9.  The movie seems to have a very Cloverfield feel to it, right down to a lot of the shaky cam movements. The potential downfall is that people might not get some of the allegory or mistake it for something else. Most people are used to see an invasion movie without showing any point to the alien invasion, we’ll see if they can latch onto something a bit different.

Wow, how many high profile roles can Eric Bana fit into one year? Three apparently. With roles in this, Star Trek and Funny People this Aussie appears poised to ingrain his face into American pop culture. The Time Traveler’s Wife is a film based on the very popular book of the same name. Add in Rachel McAdams of The Notebook fame and you have a perfect date movie for the end of the summer.

What could go wrong? Well, the romance crowd isn’t usually grouped in with the same people of the science fiction crowd. Although, this story if definitely falls more in the romance category. The sci-fi aspect of the story is more a obstacle for true love to overcome. This is the best film of the summer for a good date night. Get ready boys, your women will want you to take them to this. Who knows, you might have a little fun while you are at it! 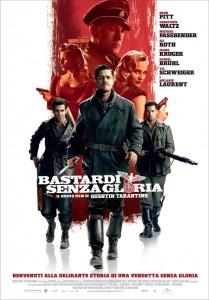 If you are a Quentin Tarantino fan you’ve been waiting for this one for a while. His first foray into World War II era films looks to be an over the top and fun look at a unit call ‘The Basterds who ultimate goal is to mess with the Nazis and cause as much bloodshed as possible. The ensemble cast is led by Brad Pitt, and consists of many people you’ve seen but may not know their names yet. If this is anything like his other films then you will remember them afterwords. Expect a lot of dialogue, a lot of cursing, and a fair amount of gore. Don’t forget yet another awesome soundtrack for you to pick up after you see the film.

What could go wrong? I don’t know it is something that can go wrong, but Tarantino has never appealed to a mass audience.  He has his loyal followers, but has yet to get any mass appeal beyond film buffs. His films always do respectable business, but Death Proof was considered underwhelming by most people. With the build up of this project over the past decade expectations are going to be through the roof.   It would be hard for him to disappoint his fans, so he has at least something going for him. Expect a respectable sum of profits for this film, but it isn’t going to break any records. The best thing going for the film, is that it has easily the most accessible material of any of his films to date. I have always been a Tarantino fan, but never one who thought he could reinvent the wheel. It is, however, one of my most looked forward movies this year.

Come back soon for Part 2, where I discuss the films that come out in September and October. This year’s early fall slate has a lot more goodies in it than any other previous year!