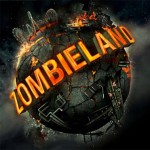 Every time I see a new trailer for this I laugh more than the last. Woody Harrelson looks great as the hillbilly with a flair for zombie killing. Jesse Eisenberg still looks a bit of a Michael Cera stand-in to me, but hopefully once I see the film he will seem set apart a bit more than what is shown in the trailers. Emma Stone and Abigail Breslin look great as the sisters who seem just as good at zombie killing as Harrelson’s backwoods character. Looks like this could be a very fun movie!

In the horror comedy Zombieland focuses on two men who have found a way to survive a world overrun by zombies. Columbus is a big wuss — but when you’re afraid of being eaten by zombies, fear can keep you alive. Tallahassee is an AK-toting, zombie-slaying’ bad ass whose single determination is to get the last Twinkie on earth. As they join forces with Wichita and Little Rock, who have also found unique ways to survive the zombie mayhem, they will have to determine which is worse: relying on each other or succumbing to the zombies.