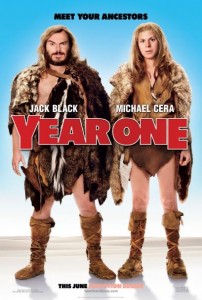 Harold Ramis is back behind the camera for his latest with his new Apatow friends and the result is a intermittently humorous film that is rather mediocre to not funny for over half the film.

Oh and Zed are a pair of tribesmen that are quite the pair of failures in their tribe. Zed is the worst hunter in the group and Oh is a gather which says a lot about these guys masculinity. Between bitching about being the outcasts of the tribe, the two bitch about how they can’t get a woman and after an incident at the Tree of Knowledge the Zed is banished from the tribe and Oh reluctantly follows him out into the world. Along there way they encounter various faces from the Old Testament and we are treated to a seemingly series of vignettes that take us all the way to Sodom where Zed and Oh are left with the task of saving their love interests who have become enslaved.

Now, let me just get this out of the way, this movie isn’t very good. In fact, if you don’t like Cera and Black playing Cera and Black then you will loathe this film as that is basically all this movie is. Now, I happen to enjoy Cera’s shtick, but I must admit it is getting old and I pray Edgar Wright makes him do something different in Scott Pilgrim, and he did make me laugh on a couple of occasions in the picture; same goes for Black. But overall the film is just a real bore, not very funny, and leaves you feeling extremely disconnected to everything.

There isn’t a story thread at all in the movie, we just jump around from one scene to the next which is supposed to be funny because it makes fun of some Bible stuff? Now, I am not a religious man, but I can really appreciate some good religious humor, but there is nothing more here besides a couple Jew’s aren’t athletic jokes and that is about as smart as the religious humor gets. 90% of all the other gags and bits in the movie revolve around fecal matter, urine, flatulence, dick, anal sex, and vagina jokes; really that is the best you can do? I found myself comparing this to History of the World Part I while watching this and while that isn’t even near being Mel Brooks best film, it is a masterpiece next to this mess. Sure that movie was a series of vignettes as well, but it was set up and delivered to us that way. The film sets itself up to be some journey for knowledge and with a purpose but serves a simply a vehicle to try and jump from one joke to the next. On top of this, some scenes just end seemingly in the middle with consequences at risk and the next scene starts immediately as nothing happened with no resolution whatsoever. None of the humor comes from the writing, or characters, or the story it is all a series of humorless gags and skits that has me seriously doubting whether I want to see a third Ghostbusters film since it is being written by the same pair of writers, Gene Stupnitsky and Lee Eisenberg, that whipped out this miserable piece of shit.

The acting in the film is fairly weak all across the board as well. Jack Black is Zed and is at his most annoying and is as bad as he has been in years. I have liked him in most everything he has done, especially of late in Tropic Thunder and Kung Fu Panda, but this might be the dumbest and worst performance of his career. Michael Cera, as Oh, supplies the most laughs in the film, but he has been far better in many other works; and lets hope Paper Heart is as great as the preview looks or else Cera might be in some serious trouble. (Seriously dude you don’t have to be the same guy every time, and I might have to disown you if you screw up Scott Pilgrim and don’t show any energy that Scott Pilgrim has almost all the time, I have faith Edgar Wright will keep you in line) David Cross is annoying and I love David Cross, so that is saying something. If you screw up having a brilliant comedian like Cross in your movie, you know you are in trouble. Oliver Platt was a bit to over the top in the picture for me, but at least he looked like he was having some fun in the role. Same goes for hank Azaria as Abraham, who pound for pound was the funniest person in the film. Olivia Wilde is hot and has a couple of decent jokes, so she did fine, but for some reason they left Juno Temple to almost play a mute for 95% of the time she is on screen, it was really odd that she never talked. I was happy to see June Diane Raphael get a nice role to work with, and actually be fairly funny from time to time, as she was great in her small part in Flight of the Conchords and am glad to see her getting more work. As for the rest of the cast, they are rather forgettable and one trick ponies and no one elevates their game to stand out from the crowd in this weak ensemble.

In the end, Year One is a mess and one that you should probably avoid. If you are a fan of Cera and Black being Cera and Black then you might find some enjoyment. But like I said, I have been a fan of both and I couldn’t find a whole lot to enjoy in the picture. Ramis just completely mis-fired here and his first mistake was thinking the writing was any good in the script, which he helped contribute to, and then let them ruin the picture in the editing room even further. The third act of the film is the strongest, but none of the comedy comes anywhere close to being as good as some of the great work we have gotten of late from the genre. So I have to say this is a rental at best, as there are a few laughs, but the more and more I think and write about this picture, the worse and worse it gets in my mind. If the trailer did nothing for you, the movie won’t either.

Year One is an F