WrestleMania weekend was everything I thought it would be. Fun, entertaining, and one hell of a long drive! 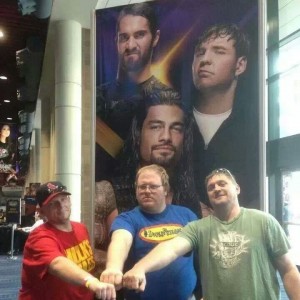 I embarked on the journey to New Orleans with three friends. We left Thursday night, stopped in Tunica, which was not a good idea. The slot machines did not treat me well, however, the rest of the weekend would prove to be much better. After a night in Tunica, we finished the drive to New Orleans on Friday. Once we arrived, we checked into our hotel, a La Quinta Inn, about 3 miles from downtown New Orleans. Once we got situated, we took a cab to the French Quarter. Having never been to New Orleans before, I was quite shocked at how big of a party Bourbon Street actually was. Bars lined the street for blocks, along with strip clubs and souvenir shops. Chants of “Yes, Yes, Yes” were heard frequently throughout the evening. It was pretty cool to see so many wrestling fans from literally all over the world. I spoke with people from all over the world, ranging from Houston, Texas to Scotland. The WWE is really a global phenomenon.

Jeremy and his hero, Hulk Hogan.

After drinking the night away, Saturday morning came way to early.  I got up early that morning to go the meet and greet of my childhood hero, Hulk Hogan. He was signing autographs and posing for pictures at the WrestleMania Axxess event at the very large New Orleans Convention Center. Due to begin at 8 A.M., Hogan actually arrived about 15 minutes early. After about a 20 minute wait, I got the chance I have been waiting 25 years for.

Hogan greeted me with a handshake and of course “Brother!” He signed my WWE title belt and we posed for a picture. Yes, I do believe we had a moment. After that brief, but most important encounter, I was off to find my friends and head for Wrestlecon.

Wrestlecon is an event that is held the same weekend as WrestleMania. It’s a convention for fans to interact with other wrestlers, former WWE and some from other organizations. The big headliner this year was Goldberg and Sting. 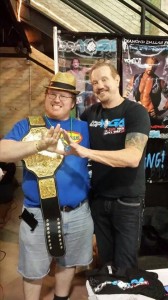 I did not meet either, as I was not a huge WCW fan as a kid. With all the pre-planning that went on with this event, I have to say I was disappointed. I expected so much more. It was not organized well at all. Those who pre-purchased tickets were supposed to get in an hour early. Instead, we waited an hour and a half in the rain. Once we got in, it was mass chaos at it’s best. Lines for meeting different wrestlers were everywhere. It was like a sauna in this small warehouse. The event was held at Sugar Mill Warehouse. It should have been much larger. Nonetheless, I made the best of the shitty situation and met several wrestlers. From Jake Roberts to Scott Hall, I had the opportunity to get autographs and photos with them. I even let my friends take my meet and greet passes for Diamond Dallas Page and Kurt Angle. As we fought our way through the crowd, Ric Flair walked right passed us. While he was not booked, he showed up to say hello to Greg Valentine and Jim Dugan. I was fortunate enough to take several photos of different wrestlers while in attendance.

After a long day, we cabbed it back to our hotel for a short nap before the Hall of Fame ceremony at the Smoothie Center. I personally enjoyed the ceremony. I thought Jake “The Snake” Roberts’ speech was very heart felt and emotional. It was really great to see him and Scott Hall doing well after their very public battles with drugs and alcohol. The headliner of the Hall of Fame was the Ultimate Warrior. I expected his speech to be a train wreck. I think most of his fans expected him to come out and take shots at a lot of people in the business. He did not, instead he took the high road. He was gracious, and had kind words for Hulk Hogan, someone he had traded verbal shots with through the years. All in all, it was a very cool evening. But, it didn’t compare to the next day, WrestleMania 30. 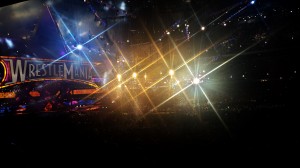 Without a doubt, this was the greatest wrestling event I had ever been to. Our seats were pretty good, as we were in section 113. I spent some of the night watching the giant monitor, especially when the wrestlers went down to the floor, but I can’t complain about my view. My friends got up to their section in the 600-level to find their seats had been blocked by a camera from the WWE. After two hours of complaining at guest services, they were moved to the floor, in section 111. Talk about a hell of a trade off! The event itself was phenomenal. Getting the opportunity to see Hulkster, Stone Cold, and Rock together in a ring was a dream come true. That was exactly the way the show needed to be kicked off. I thought all the matches were pretty good, especially the Daniel Bryan vs Triple H match, and the main event which featured Bryan against Randy Orton and Batista. Besides Bryan winning and the “Yes Movement” taking over the Superdome, the talk of the night was the Undertaker’s streak coming to an end. I will admit that I was shocked, but happy. I am a huge Brock Lesnar fan, and loved every minute of it. I thought it was a mistake, as many did in the arena. It was dead silent when Lesnar scored the 3 count. I looked around and saw people just in shock. Grown men were crying. It really was a shocking moment in wrestling history. I think, ultimately, that’s what WrestleMania 30 will be remembered for, as it should be.

Overall, it was a great weekend. We are actually considering making WrestleMania a yearly tradition now. With next year’s being in California, we are already talking about flying and how we will get around once there. The WWE clearly knows how to put on an entertaining show, as the years WrestleMania weekend will not soon be forgotten. 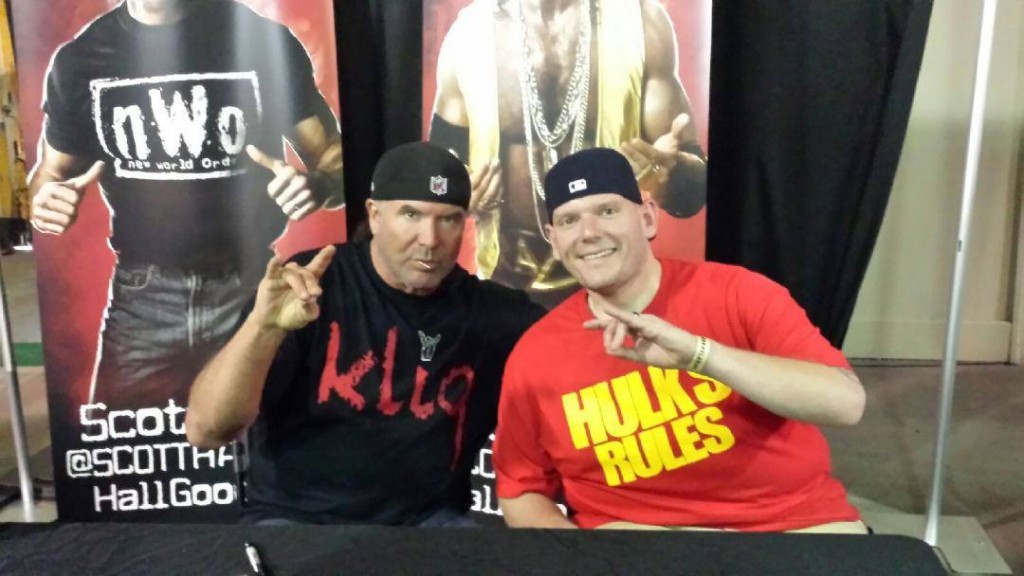