This week’s edition of WWE Monday Night Raw was not as exciting as last week’s, but it did deliver a few key segments. 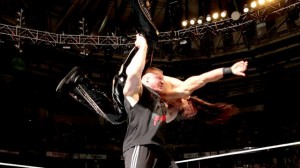 The first segment that really stood out to me was the Brock Lesnar segment. First of all, I was surprised to see him back on Raw so soon, but it is much needed. But, I will get to that in a moment. Having Lesnar come out and just dismantle 3MB was awesome. It’s what I’ve been waiting for. They need to turn Lesnar into an animal. He can be a machine of destruction, so it’s strange to me that the WWE continues to have him lose main event matches. I know he probably doesn’t care, but still, I feel they are wasting a top character. Even though I cannot stand Heath Slater, I felt sorry for him having to take those F5’s from Lesnar. In the ring is one thing, but off the barricade! Wow, that had to hurt quite a bit. Paul Heyman laid the challenge down to Triple H for one more match. This time we will get a steel cage bout at Extreme Rules in St. Louis. I know a third match between these two is not super-exciting, however, I’m hoping Lesnar just destroys Triple H. Let there be blood! 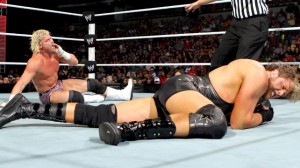 The second segment I want to address is the Dolph Ziggler vs Alberto Del Rio vs Jack Swagger. Ziggler is the modern day Shawn Michaels. He is fantastic on the mic and in the ring. He’s the total package. That’s usually good, except, he is making Del Rio and Swagger look bad. I’m sure we will get a fine triple threat match for the title at Extreme Rules, but Del Rio and Swagger both suffer on the mic. I just cannot feel any hatred toward them, nor do I really like either of them. They are both just kind of bland characters. I’ll be happy when Ziggler dispatches both of them and can move on to a new feud.

There was a bit too much filler this week at Raw. We got the return of R-Truth. Pause for the excitement, yikes! I admit that I fast forwarded through is match with Wade Barrett. It does nothing for me. Same goes for the divas. I could care less about the Bella’s and whoever they are facing. Raw seemed to just be going through the motions at times this week. I can’t say I blame them. The road leading up to WrestleMania was a big deal and a lot of hard work went into it, so I will cut them a break this week.

Now, back to why Lesnar probably needs to be involved for the next few weeks. It appears that C.M. Punk will be taking some time off. Who knows how long. As the top villain in the company, and one of the most respected wrestlers, it’s hard to say how long WWE can tread water without him. I thought his promo on Monday night was excellent. To just get up and walk away during his speech was incredible. Paul Heyman’s look really sold it as well. 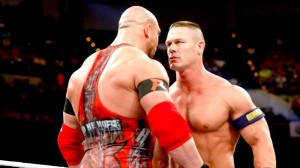 The last segment on Raw was reserved for the feud between champion John Cena and Ryback. Some may not like it, but I personally think its great story telling. Here is a guy in Ryback, who came up through John Cena. They were friends, but Ryback has grown tired, or jealous of Cena. I don’t think many really buy Ryback as a legit threat, but throw in The Shield attacking Cena at the end of Raw, while Ryback just stood there and watched, and you have an intriguing  storyline. With a few more weeks to Extreme Rules, I will watch this feud closely.