This Monday’s edition of WWE Monday Night Raw was once again a mixed bag. There was some good, and some bad. All-in-all however, thanks to the good, it was a pretty entertaining episode. 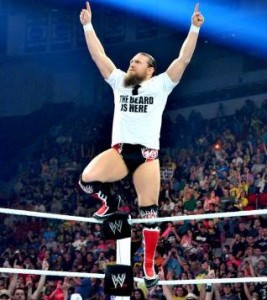 I was not a fan of how they kicked the show off. The whole haircut thing was weak. Everyone knew that Daniel Bryan was not going to shave the beard. That’s his trademark now. I’m totally fine with Vince McMahon wanting to change Bryan’s character, but really? Wrestling fans are not stupid.

Business picked up when Bryan cut a promo on John Cena. I’m going to go ahead and say it was Bryan’s best promo of his career. It got me pumped up for their Summerslam match. While the WWE is trying to make this match more than what it is, I’m okay with that. Everyone now knows, thanks to Total Divas, that Bryan and Cena date the Bella’s. Everyone knows they hang out together. The Total Divas show on Sunday made it clear that Bryan is fine with living the simple life in a modest home with a car or two. Cena, on the other hand, lives in a monstrous mansion, decked out with luxurious cars and one hell of a sweet pool. The two are polar opposites. While a championship match between them would be fine, why not sell it as a rivalry, or create some heat between them? It’s only going to make people want to see the match more.

Cena’s promo was also effective. It’s clear that with just under two weeks, things are going to get tense between the pair. I also liked that Randy Orton hit both men with an RKO. The WWE is letting fans focus on Cena/Bryan, but also keep in the back of their minds that Orton could cash in his Money in the Bank contract. This would ensure Orton a heel turn, something that fans have been clamoring for.

Before I get to my favorite part of the program, there were some things I didn’t like. It seems like atleast one match per week is ending with a wrestler walking out. That’s ridiculous. This week the walkout was Ryback, as he left the match against Mark Henry. I don’t get what WWE is trying to do here. It needs to stop. Why would anyone want to watch matches where the wrestlers walk out?

Another angle that has been hard to watch is Cody Rhodes and Damian Sandow. I was a huge fan of the ending at Money in the Bank, but this feud is out of gas. The whole tossing of the briefcase into the river was lame. Sandow may be a good wrestler, but having to listen to him on the mic is hard to do. I will be glad when this feud is over. 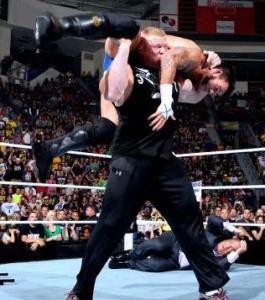 Now, on to my favorite segment of the night; it involved my two favorite wrestlers, CM Punk and Brock Lesnar. There is no doubt that they are the two most physical wrestlers in the WWE. Both have connections to MMA. Lesnar, of course, is a former UFC champion. The physicality of the fight between the two was unbelievable. Punk showed that he could hang with Lesnar, but Lesnar walked out with the upper hand again. Punk didn’t get away unscathed, as his chin was busted open. I know that fans have been critical of the WWE’s use of Lesnar, heck even I have. But, you can’t deny that whoever he wrestles is elevated to another level due to the physical specimen that Lesnar is. Punk is already one of the top wrestlers in the world, I can’t wait to see that show that him and Lesnar put on at Summerslam. Throwing Paul Heyman into the mix only makes it better. Heyman makes Lesnar seem like more of a monster than he is. That’s the point of a great manager.

Next week will be a very important Raw, as it will be the WWE’s final chance to hype Summerslam. What will transpire after Heyman challenged Punk to a match on Raw next week? What will transpire between Cena and Bryan? Hopefully, the WWE can deliver a solid show before their second biggest pay per view of the year.