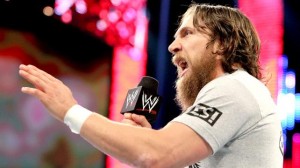 This week’s Monday Night Raw was one of the more boring programs in recent months. It didn’t do much to advance any storyline, other than the Randy Orton/Daniel Bryan feud, as well as the CM Punk/Paul Heyman feud.

My favorite segment of the night had to be Punk’s homecoming promo. The crowd was red hot for his promo, which was entertaining. I like the fact that he mixed some hockey talk in there, even though it was for the Blackhawks. Anyone who knows me knows that I am not a fan of the city of Chicago. I’ve never been treated worse by sports fans, therefore, I try to avoid the city as much as possible, but seeing Punk get the crowd fired up was enjoyable. Watching Paul Heyman destroy the moment makes the next pay per view, Battleground, all the more interesting.

Randy Orton continued his devious ways, this time brutally beating Rob Van Dam. Orton’s transformation back to a venomous heel has been well done. It’s really fun to watch, but I hope that he begins to focus more on the title, rather than destroying a wrestler every week. I may be in the minority, but I also enjoyed his interaction with the Bellas. It adds some realistic feeling to the storyline. The Bellas are pretty good actresses, so the segment went over quite well. Has there been a heel in the WWE that is more hateful in recent years than Orton?

Finally, I thought the Rhodes brothers attack on The Shield was pretty solid. The crowd loved it, and it came off wonderfully on television. I’m not sure what it means for the upcoming pay per view, but it was awesome to see, nonetheless.

On a side note, keep Curtis Axel off television. He is completely boring and useless. I want to turn the television off every time he is on.