Win a Pass to ‘Amelia’ at the St. Louis Advance Screening

ReviewSTL invites you to enter to win passes to the St. Louis advance screening of “Amelia” 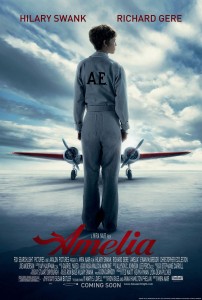 In order to enter the contest, simply leave a comment at the bottom of the page telling us why you want to see this film. Winners will be chosen at random and notified via e-mail. NO PURCHASE NECESSARY.

Please note that winning passes to “Amelia” does not guarantee admission to the film. You must arrive early as seating is first-come, first-served. It is usually safe to arrive at least 1 hour or more before show time!

Screening is TUESDAY, OCTOBER 22nd at Great Escape Gravois Bluff. Good luck! We hope to see you at the movie.

Hilary Swank and Richard Gere star in director Mira Nair’s biopic tracing the life of famed aviator Amelia Earhart — who made history in 1932 by becoming the first woman ever to fly solo across the Atlantic Ocean. Five years later, as Earhart attempted to fly around the world, the pilot and her plane simply vanished after crashing into the Pacific Ocean. Virginia Madsen and Ewan McGregor co-star in the Avalon Pictures production. – Jason Buchanan, All Movie Guide