Will Rooney Mara Be Topless On “The Girl With The Dragon Tattoo” Poster? 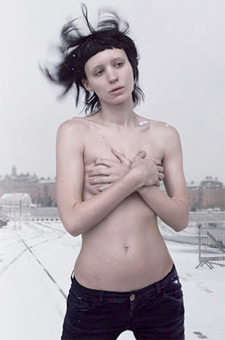 If it was up to David Fincher she would.

Fincher has received quite a bit of attention lately due to the award season and The Social Network.  Unfortunately for him, it seems that his Oscar gold is slipping away from him with The King’s Speech being the current front runner.  But Fincher doesn’t seem to be phased because he is just moving forward on his next project.

His next project is The Girl with the Dragon Tattoo.  A film that in my opinion is completely unnecessary.  The Swedish film is great as it is.  This is just a money grab for the studio.  I am sure Fincher will do great with the material, but for me, it is much like Let Me In.  Two films that are the same.

But let’s talk about the headline of this article.  David Fincher recently talked with the Hollywood Reporter.  Dragon Tattoo came up, and he mentioned the marketing campaign he wants to do.

It shows Daniel Craig half-hidden behind co-star Rooney Mara, who’s looking directly into the camera. Her hair is spiky, her face pierced with rings, her body covered in tattoos. It’s black and white and beautiful, but there’s no way in hell any studio will ever let Fincher use it, as he knows.

Because Mara is naked from the waist up.

Are you excited about this film?  Have you seen the original?  Let us know in the comments below.