Wicked is the untold story of the witches of Oz, based on the best-selling novel by Gregory Maguire. It is here we learn how they became known as “The Wicked Witch of the West” and “Glinda the Good,” back when the two shared an unlikely friendship at Shiz University. The show has won over 100 awards worldwide, including the Grammy® for Best Musical Show Album (Original Broadway Cast Recording) and three Tony® Awards: Best Actress in a Musical (Idina Menzel), Best Costume Design (Susan Hilferty) and Best Scenic Design (Eugene Lee). 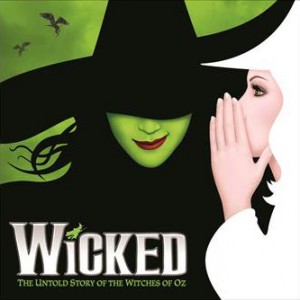 Sequels and prequels are always a touchy subject. Especially when they are based off of a timeless classic, like The Wizard of Oz (1939). There is so much pressure to get things right, as fans of the original property are counting on you to leave their coveted work of art unscathed. That goes double when your show is based off of a best-selling novel that pays homage to your beloved property. It’s a risky endeavor, but when done right it really pays off. And Wicked is an example of when it pays off big time.

I had only seen Wicked once before this tour, and I couldn’t have been more excited to see it again. It holds a high spot on my top 5 musicals of all time, and I couldn’t wait to see it again. On the evening of the performance, I found out that Elphaba (the lead role) would be played by the show’s standby, Mary Kate Morrissey. I always get a little worried when a lead is swapped out, mainly due to a bad experience having seen the titular character in The Phantom of the Opera played by an understudy. Yet I am thrilled to say that my fears were unwarranted, as Morrissey was wickedly fantastic in the role. If I hadn’t known any better, I never would have thought she wasn’t chosen to command the lead from the start. The actress gives a breathtaking performance, going through the emotions of a complex teenager growing up in a world that doesn’t accept her. Her acting is as wonderful as her voice, which had all 4,500 seats of the Fabulous Fox Theatre erupting with applause. Morrissey was far more standout than standby in the show, and was one of the brightest spots in the musical (and not just because she’s painted green).

Opposite Elphaba is Galinda (who will become known as Glinda the Good), played by Amanda Jane Cooper. The lovely young actress is bright and bubbly, a perfect fit for the role, and is responsible for plenty of the laughs throughout. Her chemistry with Morrissey (or what starts purposefully as lack thereof) is great, as the two go on a journey to find themselves: sometimes together, and sometimes apart). But no matter what happens, there is always a connection between the two characters, and that shows on-stage. Among the many favorites of the show is “Popular,” one of the better known songs in the show, and Cooper knocks it out of the park with her performance. I would say that her personality and vocal talents rival that of Kristin Chenoweth on the cast recording. Watching her light up the stage was always a lot of fun.

For my money, it doesn’t get much better than the closing number of ACT I. Without giving too much away for those who haven’t seen the show yet, the first half of the show ends with “Defying Gravity.” If there was a single person in the auditorium who couldn’t tell that Mary Kate Morrissey has the chops to make the role work, their mind must have changed after this one. It’s my favorite part of the show, as Elphaba decides that she can’t let anyone hold her back. It is truly one of the standout moments of the show, as the actress literally defies gravity.

For fans of The Wizard of Oz, there is plenty of homage to the source material to keep you happy. It’s really fun to see how little details are interwoven throughout the show, pointing to clues that will become major characters and plot points in the story we all grew up with. With that being said, it is a prequel, and you can enjoy it without having ever seen the classic film or reading an L. Frank Baum novel.

The songs from beginning to end are fantastic, thanks to music and lyrics by Stephen Schwartz (Godspell, Pippin). There is no question as to why the original cast recording won the Grammy® for Best Musical Album, and the show will having you seeking the tracks long after leaving the parking lot. It’s the kind of musical that sticks with you, and lingers on. So you might want to pick up that cast recording before you leave the theatre.

Wicked is a fantastic show for kids and adults alike, however it probably isn’t suitable for really young children. I would probably say first grade and up would be an acceptable age to attend. There are plenty of sights and sounds, from the magnificent sets and costumes to the wonderful orchestrations, that audiences of all ages can appreciate. The only thing more Wicked than the Witch of the West is the fact that the show can’t stick around longer.