Why They Play the Game

With the loss of Adam Wainwright before spring training even got fully underway, most pundits decided to write the St. Louis Cardinals off. It is, after all, pretty tough to win anything when you lose your ace, let alone a 20-game winner who’s placed in the top 3 of the Cy Young voting the last two years.

And it isn’t easy to predict the future. Injuries, fluke, luck, and aging all take tolls on players and teams throughout the season, and chaos theory pretty much reigns supreme.

In hindsight, this was probably the most absurdly unpredictable season for the Cardinals that I can recall.

Matt Holliday underwent an emergency appendectomy after the first game of the season and spent two stints on the disabled list, losing 38 games.

Albert Pujols started the season slow (for him) and suffered a broken bone in his wrist and missed two weeks.

Nick Punto, signed to be a dependable backup in the infield, had three stints on the disabled list.

Lance Lynn, a dependable rookie who was coming into his own, strained his oblique and missed the last two months of the season.

David Freese, the starting third baseman, broke a bone on a fluke pitch and missed two months of the season.

Allen Craig, the fourth outfielder and a solid hitter, broke his kneecap and missed two months of the season.

Chris Carpenter, the number two starter and one of the best pitchers in Cardinals history, went 1-7 in his first eight decisions.

Colby Rasmus, the starting centerfielder coming off a solid 2010 season and expected to be a cornerstone of the lineup for the next ten years, seemed to lose his way and never took off.

Ryan Franklin, the team closer and one of the most dependable pitchers on the staff the last two years, suddenly forgot how to get three outs.

Amalgamate all these elements, play the season out a thousand times, and see what happens.

It’s a good thing they actually play the game, because when you put these elements on paper, it doesn’t look too good. The so-called “experts,” the ones paid to watch and analyze as much baseball as humanly possible, didn’t like the Cardinals’ odds.

Need a refresher on who they thought would win? 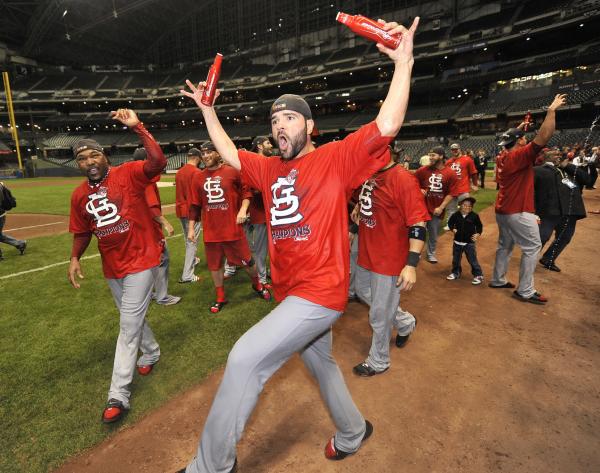 Exactly one person picked one team correctly in the World Series, and he picked Texas to represent the AL (note, he did say they would lose).

This team. Somewhere along the way, they remembered who they are. They represent the latest incarnation of one of baseball’s blue chip programs. One team out of 29 others has more World Series titles than the Cardinals (who, by the way, have beaten the Yankees three out of five times they’ve played head to head in the fall classic).

And they haven’t done it the way a team’s “supposed to” do it. In the offseason, they decided to sacrifice defense for increased offensive output. People scoffed at them; I’ll admit, as a traditionalist, I questioned the move. In the beginning, people hated the move, as Ryan Theriot struggled to replace Brendan Ryan, generally considered one of the top fielding shortstops in the game. The pitching staff ranked eight in the league with a 3.74 ERA. Championships are won with defense, the experts said. The best offense is a good defense, right? 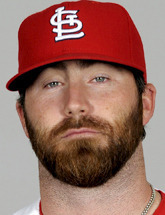 Jason Motte would like you to know, his beard's better than yours.

Horsepoop, the Cardinals said. The best offense is a good offense. This team wasn’t the MV3 2.0 everyone envisioned, nor was it the 1930 Cardinals team, which scored a remarkable 1,004 runs in 154 games, still a franchise record. *

Still, this team got production from top to bottom. Of the players who finished the season as the starters, only Rafael Furcal hit lower than .270, but he managed to hit six home runs in roughly 1/3 of a season. The team led the National League in: runs, hits, batting average, on-base percentage, slugging, on-base plus slugging, and total bases.

Well, what about the starting pitching in the post-season? The team with the best rotation is going to win, right? That’s why everyone picked the Phillies to win the National League. With its front four of Roy Halladay, Cliff Lee, Cole Hamels, and Roy Oswalt, they were supposed to be unhittable on their way to the World Series.

Not quite. The Cardinals starters had perhaps the least effective NLCS possible, yet they managed to survive thanks to an incredible, uberman-like performance by the bullpen.

They’ve done it with defense. The Cardinals committed a total of two errors in the NLCS while the Brewers decided to boot the ball nine times. Jerry Hairston, Jr.’s attempt to scoop the ball to Rickie Weeks was an especially fun moment.

John Mozeliak did it with trades and free agency. Working with Tony to assess the team’s needs, he traded a prospect for Rafael Furcal, who’s provided solid defense and a dangerous bat at shortstop. He traded the underachieving Rasmus and two non-factor lefties to Toronto in exchange for Edwin Jackson (possibly the team’s best starter down the stretch), Mark Rzepczynski, and Octavio Dotel. And Corey Patterson. He picked up another lefty reliever, Arthur Rhodes, who was waived by Texas, the very team he’s set to pitch against. Lucky guy. He’s guaranteed a World Series ring win or lose.

They’ve endured the heat from the outside world and handled it on the field. Everyone outside of St. Louis seems to be against the Cardinals and especially Tony La Russa; rather than fire back, they’ve kept their calm and composure. This is why the team brought in veterans like Lance Berkman, to handle pressure and funnel it into production.

The moment last night, when Albert called time out during Prince Fielder’s last at-bat so he could take in the standing ovation Brewers fans were giving him? An act of sportsmanship rarely seen.

This is why the game is played. This is why we watch. You can’t script this.

You can’t count on the team finding a rallying cry in two small animals.

You can’t possibly expect a team 10.5 games back to be a threat in October.

You can’t expect to beat the best team in baseball.

You can’t expect to beat the best home team in baseball twice in their park.

Enough with what this team can and can’t do. Can’t is a four-letter word.