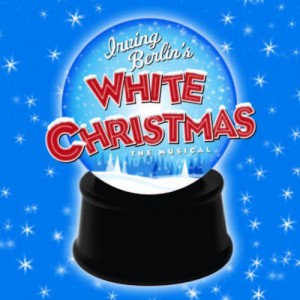 As Christmas roles closer the events of the season really start to pick up. One of the biggest Christmas events in town is the hot Broadway production Irving Berlin’s White Christmas The Musical. The show is packed with all the numbers from the famous film of the same name, and more! If you are feeling a bit like Scrooge, then quickly buy a ticket and watch your mood change (no ghosts required).

The biggest hurdle a show like this has to face is to transcend its source material. The original film was directed by Casablanca director Michael Curtiz and had marquee names like Bing Crosby, Danny Kaye, Rosemary Clooney, and Vera Allen as its stars. It is easily one of the most famous musicals of all time, so how do you top that? With a little bit of flair and lots of fun.

If you aren’t familiar with the story White Christmas follows entertainers Bob Wallace (Stephen Bogardus) and Phil Davis (David Elder), who were two buddies from World War II. The two are one of America’s leading entertainment acts. The two meet sister act, Betty and Judy Haynes (Kerry O’Malley and Megan Sikora) at the insistence of a letter from an old war buddy. Phil knowing that Bob needs a female presence in his life sets it up so the duo go to Vermont with the sisters. Upon arriving in the rare snowless Vermont in December, they find their old General from the war owning the struggling inn. A plan of action is set up to help the General’s problems.

There are few changes between the film and the stage production, a few things get shuffled around, and more musical and dance numbers are added. All the favorites from the original such as, “Sisters”, “The Best Things Happen While Your Dancing”, “What Can You Do With a General?”, “Love, You Didn’t Do Right By Me”, and of course “White Christmas”. Many of the numbers are expanded upon, and lots of new dance choreography is thrown in to spice up the production.

Many times when you adapt a film to a stage production the action is contained mainly to a couple sets. White Christmas has a staggering amount of set changes, to the point where I was entertained many times just by the changes in the scenery. The sets range from minimal design, like the Ed Sullivan show set which is a curtain with a lit up Ed Sullivan logo dropped over, to a full bar scene in the Regency in the “Love, You Didn’t Do Right By Me” number. These technical flourishes with the sets help keep the old story fresh and exciting.

White Christmas is helped along by its stellar cast which consists of many old Broadway pros. Stephen Bogardus does an admirable job, but it is hard not to compare him with Bing Crosby throughout. It is a difficult job to fill such an iconic character played originally by an iconic actor. Luckily, as the show went on Bogardus made me forget completely about my reservations and completely inhabited the character for me. His partner in crime is David Elder, whose broad charm was conveyed quite nicely to the 4,500 seat Fox Theatre in St. Louis. With a voice as good as his dancing, he is one of the many bright spots.

Kerry O’ Malley and Megan Sikora had just as many obstacles to overcome as their male counterparts. All doubts about the females are dismissed easily when they enter with the song “Sisters”. Both women have great voices, and just as great stage presence. Their film counterparts would be proud of the performances given.

One of the biggest names in this stage production is that of Lorna Luft, who is the daughter of legendary actress Judy Garland and half-sister of Liza Minelli. Luft plays the role of Martha Watson. She has the most expanded role in this adaptation. With her own song and dance number, and is made a larger part of the core cast. Her vocal range is displayed incredibly well in the song “Let Me Sing and I’m Happy”. The role of Martha is much friendlier in the stage production, and she doesn’t seem to be as big of a busybody.

Young Sarah Safer is a bright and shining star as Susan Waverly, granddaughter of General Waverly. Her number is a reprise of the tune that Martha Watson does in the first act, and almost seemed to bring the audience to their feet. She is likely to be the favorite of many in the audience.

The bottom line about this show is that it will leave you with a smile on your face, and the good cheer of Christmas time. The familiar songs, and Broadway style of decades past will get the nostalgia going. You are bound to leave this show humming the tunes, and hoping for your very own White Christmas.

Irving Berlin’s White Christmas The Musical is at the Fox Theatre in St. Louis from December 15-27, 2009.