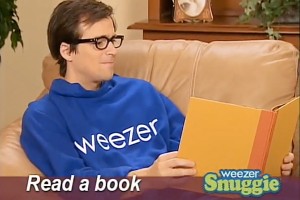 According to the AP, the rock band Weezer experienced some bus trouble today when the group hit some ice while driving in New York. Weezer’s bus ended up in a ditch, and lead singer Rivers Cuomo was taken with their assistant Sarah Kim to the hospital. Luckily injuries suffered were only minor.

It has yet to be reported on whether or not the band will play their show tomorrow night. I guess it depends on how Rivers is feeling, but I am guessing that it probably isn’t going to happen. I guess we will just have to wait and see.

It was also reported that River’s wife and daughter were both on the bus, but walked away without any injuries.

Weezer singer hurt when bus skids off road in NY

By CRISTIAN SALAZAR (AP) – 3 hours ago

Rivers Cuomo and the band’s assistant, identified as Sarah Kim, were taken to a local hospital following the accident in the upstate New York town of Glen, about 40 miles west of Albany. Kim also suffered minor injuries.

Cuomo’s wife and 2-year-old daughter also were on the bus when it barreled off the road, but the two were unhurt. They were traveling east to Boston, Mass., where the band was scheduled to perform on Monday.

About 7:22 a.m. the vehicle struck ice and the driver lost control, police said. The vehicle mounted the median, then swerved back across the eastbound lands, rammed a guide rail on the right shoulder and crashed into a ditch alongside the roadway, police said.

Cuomo and Kim were transported by ambulance to St. Mary’s Hospital in Amsterdam, N.Y.

Patrick Wilson, the band’s drummer, posted an entry about the accident on his Twitter feed hours after the crash.

“It was perfect conditions for black ice,” Wilson said. “Got loose going towards the meridian, driver saves it but bus goes thru guardrail into 6ft ditch.”

It was not immediately clear if Wilson was also on the bus, or whether the group would perform at its scheduled concert on Monday.

The band’s official blogger and agent did not immediately respond to e-mails or phone messages requesting comment on Sunday afternoon.

Formed in Los Angeles in 1992, Weezer had a handful of hits two years later with the songs “Undone — The Sweater Song,” “Buddy Holly” and “Say It Ain’t So.” The band released its seventh studio album, “Raditude,” in November.