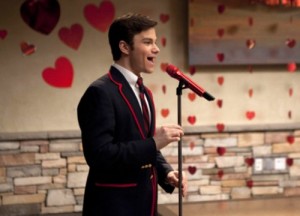 Tonight Glee returned to its regular Tuesday schedule with their Valentine’s Day episode. While it wasn’t as “big” or flashy as Sunday’s Superbowl episode, Silly Love Songs still managed to advance the story and incorporate a few good performances…but not without a few hiccups along the way.

One of the biggest problems with Glee is that it can be very inconsistent. Usually the problems involve filler episodes that go nowhere or a preoccupation with special guest stars. This week the story seemed positively schizophrenic. One minute Puck (the school bad ass) is professing his love for the super-sized female wrestler, and the next Blaine is coercing his school’s choir to profess his love for a Gap junior manager. Not to mention Santana and Tina both inexplicitly break into tears. Maybe all this chaos is meant to represent the erratic throes of love…but probably not.

Maybe I shouldn’t complain, more than a few good songs came out of these left field plot turns. In his attempts to woo the overweight female wrestler, Puck romantically chooses Queen’s “Fat Bottomed Girls” to serenade her with. She is offended of course, but continues to accept his advances. Blaine’s off-campus rendition of Robin Thicke’s “When I Get You Alone” was awkward, but pretty good. Artie sings (and Mike Chang dances to) MJ’s “P.Y.T. Pretty Young Thing” and Rachel improves on Katy Perry’s “Fireworks”.

Santana also gave the kissing disease to Finn to give to Quinn because she’s a bitch and wanted to get revenge…then she gave googly eyes to Sam. Sound convoluted? It was.

Props to Glee for advancing the storyline, but its execution was lacking any real sense of order or restraint.

What did you think about tonight’s episode? Let us know below.